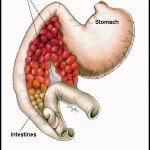 Pancreatitis is a condition that involves the pancreas causing severe abdominal pain, vomiting and systemic inflammation. Major causes include bile acid reflux from gall stones and excessive alcohol intake combined with a high fat diet with increased incidences during the Christmas period when alcohol and fat consumption is at its highest in the general population.

A new study published in the Journal of Biological Chemistry shows that Insulin prevents the toxic impact of alcohol and fatty acid metabolites on the pancreas acting as a preventative measure.

Diabetes worsens pancreatitis and diabetics are at higher risk of developing pancreatitis and multiple organ failure. Previous research has shown that in diabetics that receive insulin the incidence of pancreatisis is significantly reduced although the exact preventative mechanism was not understood.

“Insulin works by restoring the energy levels of pancreatic acinar cells, which fuels the calcium pumps on the membrane of these cells. These calcium pumps help to restore cellular calcium and prevent the catastrophic cell death and auto-digestion of the pancreas,” said Dr Bruce the senior researcher.