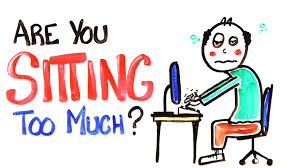 The amount of time spent sitting each day is associated with a higher risk of heart disease, diabetes, cancer and death. A new study has pointed the finger at sitting for prolonged periods of time and regular exercise may not be sufficient to compensate for the adverse health risk.

Researchers from the Toronto Rehabilitation Institute-University Health Network (UHN) and Institute for Clinical Evaluative Sciences in Canada conducted the study as the extent to which sedentary lifestyle brings bad health was unknown.

“What we didn’t know was whether the sitting time and health relationship was because people were also exercising poorly,” said senior author Dr. David Alter.

The study consisted of a meta-analysis of 47 studies that tracked groups of people who reported data on how often they spent sitting and on how much exercise they took.

It was determined that people who were the most sedentary were more likely to be diagnosed with type 2 diabetes, cardiovascular disease and various cancers, including breast, colon and ovarian cancers. The most sedentary people were also 24% more likely to die during the studies than participants who spent the least amount of time sitting. Scheduled daily exercise did not necessarily mitigate the sitting effects.

“Another way of saying it is just because one does their 30 to 60 minutes of exercise per day [it] doesn’t ensure their health,” said Dr. Alter. “These are two distinct factors, we need both, we need exercise and need to be sitting less.”

“More than one half of an average person’s day is spent being sedentary – sitting, watching television, or working at a computer,” Dr. Alter said. “Our study finds that despite the health-enhancing benefits of physical activity, this alone may not be enough to reduce the risk for disease.”

The researchers recommend alternative methods to sitting including standing.