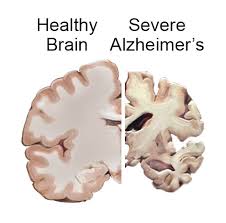 The Word Health Organization has released estimates revealing that approximately 47.5 million people suffer from Alzheimer’s disease or some other type of dementia.

A new study, published by the University of Montreal Hospital Research Centre (CRCHUM), has specified that Alzheimer’s disease may be caused by the abnormal build up of fatty acids in the brain. The research suggests that Alzheimer’s is a metabolic disease like diabetes and obesity.

“We found fatty acid deposits in the brain of patients who died from the disease and in mice that were genetically modified to develop Alzheimer’s disease. Our experiments suggest that these abnormal fat deposits could be a trigger for the disease”, said Karl Fernandes, a researcher at the CRCHUM and a professor at University of Montreal.

The brains of nine patients who died from Alzheimer’s disease were examined and it was determined that their brains contained significantly more fat droplets that healthy brains. Advanced mass spectrometry technique was used to identify these fat deposits; identified as triglycerides enriched with specific fatty acids, found in animal fats and vegetable oils.

“We discovered that these fatty acids are produced by the brain, that they build up slowly with normal aging, but that the process is accelerated significantly in the presence of genes that predispose to Alzheimer’s disease”, said Karl Fernandes. In mice predisposed to the disease, we showed that these fatty acids accumulate very early on, at two months of age, which corresponds to the early twenties in humans. Therefore, we think that the build-up of fatty acids is not a consequence but rather a cause or accelerator of the disease.”

Fortunately, there are pharmacological inhibitors of the enzyme that produces these fatty acids. These molecules, which are currently being tested for metabolic diseases such as obesity, could be effective in treating Alzheimer’s disease. “We succeeded in preventing these fatty acids from building up in the brains of mice predisposed to the disease. The impact of this treatment on all the aspects of the disease is not yet known, but it significantly increased stem cell activity,” explained Karl Fernandes. “This is very promising because stem cells play an important role in learning, memory and regeneration.”