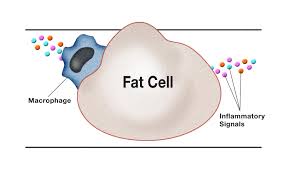 The University of Vermont, has released a new study, published in the Journal of Nutritional Biochemistry, specifying that diet low in saturated fat decreases the inflammatory immune response. Previous research has indicated that saturated fats produce a metabolic impact.

Metabolic diseases have an inflammatory immune response, (involving the release of cytokines from cells). The researchers traced the effect of saturated fats on metabolic disease. A 2011 study revealed that the the most prevalent saturated fat in the diet, increased the production of the inflammatory cytokine, interleukin-1beta (IL-1beta) via a process involving activation of an innate immune system response called the NLRP3 inflammasome. Another 2013 study determined that a high palmitic acid diet increased the concentration of several inflammatory biomarkers in both blood and muscle and impaired insulin action in women. The same diet was associated with a reversible decrease in daily physical activity and increased anger; thus, a diet high in saturated fats may interfere with normal cognitive processes.

“It has been recognized that obesity — a disorder characterized by abnormally high accumulation of fats in the body — and an unhealthy diet can increase the risk of chronic metabolic diseases such as atherosclerosis, type 2 diabetes, and Alzheimer’s disease, but not in everyone,” said lead author C. Lawrence Kien, M.D., Ph.D., Davignon Green & Gold professor of pediatrics and medicine at the University of Vermont (UVM).

“Scientists have strived to understand the effects of dietary fats on inflammation by studying isolated cells and animal model systems,” Kien said.

The researchers demonstrated that varying the normal range of palmitic acid in a common human diet influences the production of IL-1beta. The research participants consisted of healthy lean and obese adults, enrolled in a randomized, cross-trial compared over a three week period; with one week period of a low fat diet.

In their latest study, Kien and colleagues, including UVM immunologist Matthew Poynter, Ph.D., demonstrate for the first time that varying the normal range of palmitic acid found in common human diets influences the production of IL-1beta. They studied healthy, lean and obese adults, enrolled in a randomized, cross-over trial comparing three-week diets, separated by one-week periods of a low fat diet. One experimental diet was similar to the subjects’ habitual diet and was high in palmitic acid; the other experimental diet was very low in palmitic acid and high in oleic acid, the most prevalent monounsaturated fat in the diet. After each diet, a number of outcomes were measured, including those related to inflammation. Relative to the low palmitic acid diet, the high palmitic acid diet stimulated the production of cytokines modulated by the NLRP3 inflammasome, thus creating more inflammation and associated risk for metabolic disease.

“Ultimately, we would like to understand how these dietary fats behave — both shortly after ingestion, as well as when stored in adipose tissue as a consequence of many months of ingestion — and thus contribute to inflammation and the risk of metabolic disease,” Kien said. “In other words, habitual diet and especially the type of fat ingested may determine, in part, the risks associated with obesity.”