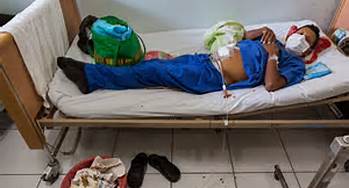 El Salvador is one of the countries that has taken a proactive stand against several herbicide chemicals. Among the list of the banned 53 chemicals are Paraquat, Glyphosate (Roundup) and Endosulfan. Glyphosate is the most widely used herbicide world wide with a production of 620,000 tons in 2008.

The ban is a result of a pervasive kidney disease that has afflicted the region’s agricultural workers, raising considerable concern with the Central America’s Health Ministry who proclaimed an investigation into the cause of the kidney disease as a top public health priority; committing to a series of steps to curtail the disease.

The mysterious kidney disease has caused a considerable public health concern and has killed thousands of agricultural workers in the region along Central America’s Pacific Coast, as well as in Sri Lanka and India.

El Salvador presented findings from an ongoing official study, conducted jointly with the Pan American Health Organization, suggesting that pesticides and fertilizers containing heavy metals may be to blame for the kidney disease. Environmental tests of soil and water samples in a village heavily affected by the disease found the presence of high levels of cadmium and arsenic, heavy metals toxic to the kidneys.The common denominator amongst the afflicted sufferers is that all reported applying pesticides without any protective equipment.

Now a new study published in the International Journal of Environmental Research and Public Health illustrates the pervasive nature of Roundup contamination and has linked the herbicide to a global outbreak of fatal chronic kidney disease occurring predominantly in poor farming regions around the world.

The epidemic nature of the problem was illustrated by the findings that chronic kidney disease has killed more people in El Salvador and Nicaragua than diabetes, AIDS and leukemia combined over the last five years. It is the second leading cause of death in men in El Salvador.

The researchers of this newest study propose that the toxic effects of Roundup are enhanced when the herbicide is mixed with water which contains metals or heavy metals like arsenic and cadmium, either naturally present in the soil or added externally through fertilizer input. The study correlates the occurrence of kidney disease with the consumption of hard water, in the prior five years, in 96% of patients afflicted with the disease.

This study exclusively examined the level of roundup residue contained in the actual soybeans and found glyphosate and AMPA (a glyphosate metabolite) at high concentration levels. In contrast, conventional and organic soybeans did not contain these chemicals.

Glyphosate is shown to be absorbed and translocated within the entire plant, and has been found in both leaf material and in the beans of glyphosate tolerant GM soy plants. Monsanto has claimed that residues of glyphosate in GM soy are lower than in conventional soybean, where glyphosate residues have been measured up to 16–17 mg/kg, which likely must have been due to spraying before harvest (desiccation). Another claim has been that documented maximum residue levels up to 5.6 mg/kg in GM-soy represent ‘‘…extreme levels, and far higher than those typically found’’.

Seven out of the 10 GM-soy samples tested surpassed this ‘‘extreme level’’ of glyphosate + AMPA residues, indicating a development towards higher residue levels. The increased use of glyphosate on Roundup Ready soybeans in the US, contributing to selection of glyphosate-tolerant weeds with a response of increased doses and/or more applications used per season, may explain the observed plant tissue accumulation of glyphosate.

Recent studies have confirmed a high risk of dose dependent heart, kidney and skeletal malformations upon maternal exposure to the glyphosate herbicide. As there are currently no mandatory regulatory guidelines for genetic labeling in the US, pregnant women have no way of protecting their babies from maternal exposure, substantially increasing the risk for heart, kidney, skeletal and lung malformation.Numerous studies to date have documented the toxicity of commercial Roundup. Severe malformations have occurred in embryos of the South African clawed frog Xenopus laevis and chickens. In frogs, dilutions of 1/5000 of the formulation (equivalent to 430 μM of glyphosate) were sufficient to induce malformations, including shortening of the anterior−posterior axis, microcephaly, microphthalmia, cyclopia, and craniofacial malformations at tadpole stages. Embryos injected with pure glyphosate showed similar phenotypes, suggesting that glyphosate itself, was responsible for these developmental abnormalities. Roundup produced similar effects in chicken embryos, which showed a loss of rhombomere domains, reduction of the optic vesicles, and microcephaly.

The latest correlation with the emergence of a global epidemic kidney disease of unknown origin illustrates the severe environmental problems caused by Monsanto who is the leading manufacturer of Roundup. The effects of the herbicide are however; not just limited to the spray application of the herbicide on the plant but may also be linked to the residue remnants of Roundup resistant genetically modified plants. It could be hypothesized that plants containing Roundup residue as a result of genetic engineering, which absorb the heavy metals of the soil they are planted in, are just as capable of causing chronic kidney disease.

One thought on “Another study links global kidney disease to Roundup.”