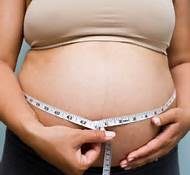 A new study published in the journal Cell pinpoints the high risk of obesity and diabetes in offspring as a result of the corresponding obesity levels in mothers. In the United States More than one-third of children and adolescents are overweight or obese and thus are at risk for long-term health problems such as type 2 diabetes. Obesity levels in mothers changes the metabolic pathways in their offspring and the research suggests that mothers who consume a large amount of fat during the third trimester are putting their children at risk for lifelong obesity and related metabolic disorders. This is the first study to examine in detail the specific brain regions and metabolic pathways involved and to examine the role of maternal pregnancy in childhood obesity and metabolic disorders.

“Our study suggests that expecting mothers can have major impact on the long-term metabolic health of their children by properly controlling nutrition during this critical developmental period of the offspring,” says study author Tamas Horvath of the Yale University School of Medicine.

The researchers found that mouse mothers fed a high-fat diet during lactation had offspring with abnormal neuronal connections in the hypothalamus, as well as altered insulin signaling in this brain circuit. As a result, the offspring remained overweight and had abnormalities in glucose metabolism throughout their adult life.

“Given that gestational diabetes frequently manifests during the third trimester, our results point toward the necessity of more intensified screening of mothers for altered glucose metabolism, as well as tightly controlled antidiabetic therapy if any alterations are detected during this critical period,” Brüning (the second co-author of the study) said.