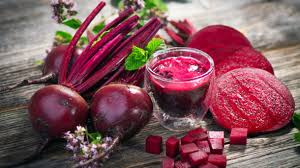 A new Washington University School of Medicine study has revealed that beetroot juice impacts on heart disease. The juice contains a high amount of nitrates impacting on muscle power in patients with heart failure.

The nitrates in beet juice, spinach and other leafy green vegetables such as arugula and celery are processed by the body into nitric oxide, which is known to relax blood vessels and have other beneficial effects on metabolism.

The research data from nine patients with heart failure specified that after two hours after beetroot juice treatment, patients demonstrated a 13 percent increase in power in muscles that extend the knee. The researchers observed the most substantial benefit when the muscles moved at the highest velocities. The increase in muscle performance was significant in quick, power-based actions, but researchers saw no improvements in performance during longer tests that measure muscle fatigue.

Patients each received beet juice treatment and an identical beet juice placebo that had only the nitrate content removed. There was a one- to two-week period between trial sessions to be sure any effects of the first treatment did not carry over to the second.

Participants experienced no major side effects from the beet juice, including no increase in heart rates or drops in blood pressure, which is important in patients with heart failure. The beet juice impact resembles the impact of two to three months of muscle training.

“It’s a small study, but we see robust changes in muscle power about two hours after patients drink the beet juice,” said senior author Linda R. Peterson, MD, associate professor of medicine. “A lot of the activities of daily living are power-based — getting out of a chair, lifting groceries, climbing stairs. And they have a major impact on quality of life. We want to help make people more powerful because power is such an important predictor of how well people do, whether they have heart failure, cancer or other conditions. In general, physically more powerful people live longer.”

“The heart can’t pump enough in these patients, but that’s just where the problems start,” said Peterson, a cardiologist and director of Cardiac Rehabilitation at Washington University and Barnes-Jewish Hospital. “Heart failure becomes a whole-body problem because of the metabolic changes that happen, increasing the risk of conditions such as insulin resistance and diabetes and generally leading to weaker muscles overall.”