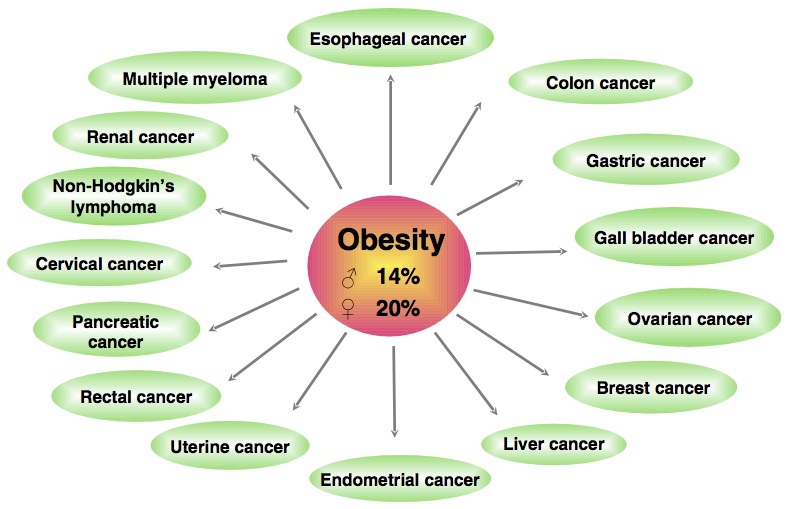 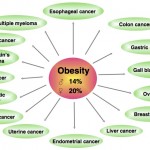 A study conducted by the Comprehensive Cancer Center at MedUni Vienna and Vienna General Hospital has implicated obesity and the associated metabolic process as the most likely cause of cancer. High Body Mass Index has been associated with a variety of adverse health effects including the inflammation in the body and a BMI over 25 is associated with obesity. A multi-national study investigated the specific impact in industrialized countries as obesity has emerged as a public health burden.

The latest study published in the Lancet Oncology revealed that 5.4% of all cancers in women and 1.9% of cancers in men are linked to a high BMI, especially as it related to cancers of the esophagus, bowel, kidneys, pancreas in men and in women the gallbladder, ovaries, uterus and postmenopausal breast cancer. “People with a BMI of 30 and above are predominantly affected, said Alexandra Kautzky-Willer, Vice Principal of the University Department of Internal Medicine III. “An increase in BMI by only a factor of 1, for example from 29 to 30, increases your cancer risk by between 3% and 10% for the said types of cancer. Particularly abdominal fat, also known as visceral fat, has a negative impact on health, since it increases your cancer risk and encourages the development of metabolic disorders such as diabetes, or cardiovascular disease.”

High BMI causes fatty deposits in certain body areas including the abdominal area; increasing the risk of metabolic syndrome and affecting the hormone balance encouraging the development and growth of hormone-related tumous, such as various forms of breast cancer or endometrial cancer. Other studies have also linked obesity to a high rate of inflammation throughout the body as pro-inflammatory mediators are increased; the “chemical messengers” that activate inflammation, with harmful metabolic consequences. Macrophages in adipose tissue directly influence the metabolic process associated with multifactorial diseases linked to obesity, such as type 2 diabetes.

“The problem with that is that insulin not only regulates the metabolism but can also act as a growth-stimulating hormone and encourage cell division and hence tumor growth”, said Kautzky-Willer. “We can therefore see a close relationship between diabetes and certain types of cancer, in particular liver and pancreatic cancer. High blood sugar levels also seem to further promote tumour growth.” Another aspect is that chronic inflammatory processes can occur in the region of the abdominal fat and these also favour the development of cancer. “The positive thing is that you can do something about this risk by losing weight or keeping an eye on your weight from the outset. Many types of cancer could be easily avoided in this way; a Mediterranean diet and exercise also help.” “The BMI relates to body weight and makes no distinction between fatty tissue and muscle mass. So, for example, a bodybuilder, who is very heavy because of his muscle mass but hardly has any fat at all, would have a very high BMI. Abdominal girth, on the other hand, is a much more reliable indicator of overweight or obesity, because it can be used to specifically determine the proportion of fatty tissue.”