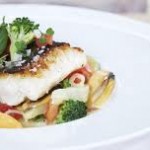 A study published in the American Journal of Clinical Nutrition found that consuming two or more servings per week was associated with a lower risk of hearing loss in women, suggesting that diet plays an important role in the prevention of acquired hearing loss.

When compared with women who rarely consumed fish, women who consumed two or more servings of fish per week had a 20 percent lower risk of hearing loss.

“Consumption of any type of fish (tuna, dark fish, light fish, or shellfish) tended to be associated with lower risk. These findings suggest that diet may be important in the prevention of acquired hearing loss,” said Curhan.