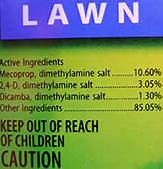 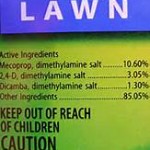 On the 5th of March 2014, Earthjustice filed a complaint for injunctive and declaratory relief against the Environmental Protection Agency citing failure to complete rule making requiring disclosure of inert substances by pesticide manufacturers. The complaint was filed in the Northern District Court and can be accessed here.

At issue is that inert ingredients defined as any ingredient that not active or not targeted to killing a pest may have substantial health side effects upon exposure by humans and their pets.

The pesticide industry is a billion dollar market and are dispersed throughout the U.S. and enter our food supply, homes, schools, public lands and waterways. Under the Federal Insecticide, Fungicide, and Rodenticide Act (FIFRA), pesticide manufacturers are only required to list “active” ingredients that target a pest and not “inert” ingredients, despite the fact that many inerts are hazardous or suspected toxic chemicals.

“Consumers and users of pesticide products have a right to know all the ingredients that are in products they purchase so that they can make more informed choices in the marketplace,” said Jay Feldman, Executive Director of Beyond Pesticides. EPA’s 2010 proposal noted public disclosure “may lead to less exposure to… hazardous inert ingredient[s] because consumers will likely choose products informed by the label.” In turn, “pesticide producers will likely respond by producing products with less hazardous inert ingredients.”

“Pesticides are in the water we drink, the air we breathe, and the food we eat. Pesticide companies should not be able to keep us in the dark about the identity and toxicity of these chemicals,” said Caroline Cox, Research Director of Center for Environmental Health.

Wendy Park the attorney for Earth justice commented on the need for the lawsuit: “EPA said that these inert ingredients should be labeled to protect consumers, but has done nothing to require such labeling. In the meantime, families and children exposed to these chemicals are suffering illnesses their doctors can’t adequately treat because they have no idea what chemicals they are dealing with. The fact is that the EPA has identified hundreds of these ‘inert’ chemicals as hazardous or potentially hazardous. We need a safeguard in place to protect communities.”