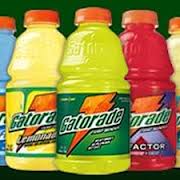 An online petition from 15 year old Sarah Kavanagh, resulted in PepsiCo removing brominated vegetable oil, (BVO), from Gatorade.
PepsiCo claims that brominated vegetable oil is used to keep the citrus flavor from separating within the liquid. Sarah began the petition as the ingredient used is a flame retardant.
Kavanagh’s petition entitled “Gatorade: Don’t put flame retardant chemicals in sports drinks!”, has over 200,000 signatures and stated: The other day, I Googled “brominated vegetable oil.” It was the last time I drank Orange Gatorade. I found out that this “BVO” is a controversial flame retardant chemical that is in some Gatorade drinks! Who wants to drink that? Not me!” … http://www.change.org/Gatorade
The European Union has not approved BVO for human consumption and its use has been banned in Japan and India. The FDA has since 1977 approved BVO on an interim basis as a  food additive, pending further study. Its interim status can be accessed on the FDA website here.
Professor Vetter, from the University of Hohenheim, Institute of Food Chemistry has suggested that the US voluntarily ban BVO in its soft drinks. In his 2010 study he analyzed the product ingredients available in Germany where BVO is banned. However, sodas originating from the US are still readily available due to the US import market.

A person who daily consumed 2-4 L BVO-containing soft drink could suffer from severe bromism. A case study point to serum bromide levels at 3180 mg/L (39.8 mmol/L). The toxic symptoms were headache, fatigue, ataxia, and memory loss which progressed over 30 days.

THE POLYBROMINATED FLAME RETARDANTS USED IN OUR CHILDRENS´ SOFT DRINKS