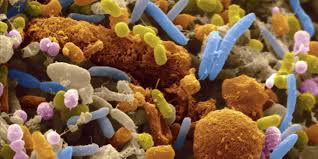 A new study, published in the journal Circulation, has revealed a solid link between gut flora and cholesterol. The study with 893 Dutch research participants identified 34 different species of bacteria that they linked to cholesterol levels and BMI of patients. They connected the bacteria to a change between 4 to 6 percent in BMI, HDL cholesterol, and triglyceride levels.

The U.S. Department of Energy’s Argonne National Laboratory and the University of Chicago have released a collaborative study revealing that gut bacteria influence circadian rhythm and metabolism.

The circadian rhythm is defined as daily mental and bodily fluctuations communicated and carried out via signals sent from the brain and the liver.

The researchers used a mouse model to test the impact of intestinal bacteria on the circadian rhythm and metabolism and determined that different species of gut bacteria are active at certain times of the day and produce compounds that lead to weight gain.

Mice raised without a normal gut microbiome, (control group), revealed evidence of a disrupted circadian clock cycle but did not gain weight, even when exposed to a high fat diet.

“The earlier explanation for microbiome-related weight gain was that some bacteria make calories from food more available to your body, but this is a fundamental alternative explanation,” said Jack Gilbert, an Argonne microbial ecologist who co-authored the study.

Another study, published in the journal of Neuroscience, has revealed that a high fat and high sugar diet compared to a normal diet, causes changes in gut bacteria that affect the brain and the ability to adapt to changing situations.

This effect was most serious on the high-sugar diet, which revealed a clear impairment of early learning for both long-term and short-term memory.

The research study used mouse models for studies relevant to humans, and the mice consumed different diets and faced a variety of tests, such as water maze testing, to monitor changes in their mental and physical function, and associated impacts on various types of bacteria in the human gut (microbiome) which consists of a complex mixture in the digestive system of about 100 trillion microorganisms.

“It’s increasingly clear that our gut bacteria, or microbiota, can communicate with the human brain,” said Kathy Magnusson, a professor in the OSU College of Veterinary Medicine and principal investigator with the Linus Pauling Institute.

“Bacteria can release compounds that act as neurotransmitters, stimulate sensory nerves or the immune system, and affect a wide range of biological functions,” she said. “We’re not sure just what messages are being sent, but we are tracking down the pathways and the effects.”

“The impairment of cognitive flexibility in this study was pretty strong,” Magnusson said. “Think about driving home on a route that’s very familiar to you, something you’re used to doing. Then one day that road is closed and you suddenly have to find a new way home.”

“We’ve known for a while that too much fat and sugar are not good for you,” Magnusson said. “This work suggests that fat and sugar are altering your healthy bacterial systems, and that’s one of the reasons those foods aren’t good for you. It’s not just the food that could be influencing your brain, but an interaction between the food and microbial changes.”