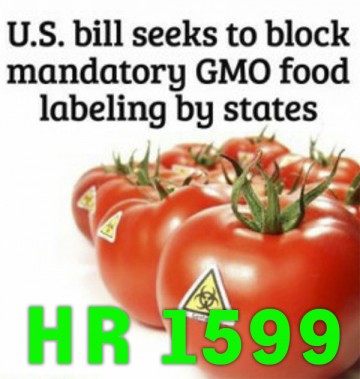 The U.S. House of Representatives passed the Dark Act last week by a vote of 275-150. The Dark act is also referred to as H.R. 1599, (Safe and Accurate Food Labeling Act of 2015), was co-sponsored by House Representatives Mike Pompeo and G.K. Butterfield. The bill preempts state law rather than allowing communities to implement their own ordinances and regulations to protect their own constituents. The bill would allow companies to voluntarily label food and specifies the following:

“This bill amends the Federal Food, Drug, and Cosmetic Act to require the developer of a bioengineered organism intended as food to submit a premarket biotechnology notification to the Food and Drug Administration (FDA). A “bioengineered organism” (commonly called a “genetically modified organism” or “GMO”) is a plant or part of a plant that has been modified through recombinant DNA techniques in a way that could not be obtained using conventional breeding techniques.

The premarket notification must include the developer’s determination that food from, containing, or consisting of the GMO (GMO food) is as safe as a comparable non-GMO food. For the GMO to be sold as food, the FDA must not object to the developer’s determination. If the FDA determines that there is a material difference between a GMO food and a comparable non-GMO food, the FDA can specify labeling that informs consumers of the difference.

A food label can only claim that a food is non-GMO if the ingredients are subject to certain supply chain process controls. No food label can suggest that non-GMO foods are safer than GMO foods. A food can be labeled as non-GMO even if it is produced with a GMO processing aid or enzyme or derived from animals fed GMO feed or given GMO drugs.

The FDA must allow, but not require, GMO food to be labeled as GMO. The FDA must regulate the use of “natural” on food labels.”

The bill would have an impact on state efforts to mandate genetic labelling of food products, including the current Vermont state law which was the first in the nation to pass a GE labeling law and then survive a federal court challenge from the food industry. It will go into effect on July 1st 2016. California and Washington are other states that have consistently attempted to pass voter lead GE initiatives. A recent study by Consumer Reports National Research Center has revealed that Americans generally do want GEs in their food, and 92% of consumers believe that foods containing genetically engineered ingredients should be labeled. The FDA has a history of confusing consumers with their “natural” labeling requirements.