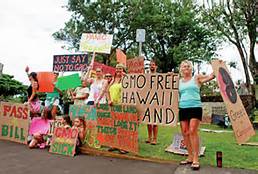 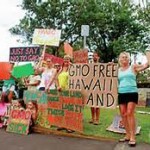 This week the big island of Hawaii County Council restricted the growth of genetically modified organisms (GMOs) by banning GMOS in a 6-3 vote. The bill does not affect those farmers who are already producing gmos. That includes papaya growers, who largely rely on transgenic varieties that are resistant to the ringspot virus, and the Big Island Dairy. In 2008, the Hawaiian island has previously adopted a more limited GMO bill that banned transgenic coffee and taro.

The bill still has to be approved by Hawaiian major Billy Kenoi. The final vote took about six months after many lengthy public comment session where hundreds of people, with a large majority speaking against genetically modified organisms, or GMOs, gave testimony before the council.

While there has been much debate over the safety of the food, the bill does not stop GMO ingredients, which are believed to exist in a large majority of food items, from being sold on store shelves or being used in animal feed.

The bills function is to curb the further adoption of GMO crops on the isle at a time when apprehension about their use has been increasing. It would also likely restrict research on the isle of new modified varieties since open-air testing will be banned, University of Hawaii scientists have said.

The penalties for violating the bill include a fine of $1,000 a day for each violation.

A GMO registry for exempted growers will be overseen by the county Department of Research and Development.

Emergency exemptions could also be granted by the council.

Before the vote, Kohala Councilwoman Margaret Wille, who introduced the bill, said she is trying to be protective of the environment and non-GMO farmers.

“I think it’s a very important step, a very modest bill,” she said.

Wille also said she is committed to forming an ad hoc committee to further study the issue, though no action yet has been taken on that proposal.

“We can work out the nuances,” she said. “We can work together as to what is our vision and what is the future of the island.”