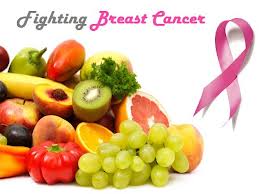 A study presented by the Yale Cancer Center at the 2014 annual meeting of the American Society of Clinical Oncology revealed that lifestyle changes focused on healthy eating and regular exercises decreases bio-markers related to breast cancer recurrence and mortality. The biomarkers are based on the expression of certain proteins that correspond to a level of inflammation in the body suggesting that lifestyle changes influences gene expression of these proteins on an epigenetic level. Epigenetics is the change in gene expression controlled by environmental factors.

One study consisted of splitting obese or overweight women into two groups: those who who received weight loss and exercise counseling and a usual care group that received a brochure about lifestyle changes. After six months, women in the weight loss counseling group experienced an approximate 30% decrease in C-reactive protein (CRP) levels compared with a minimal decrease in women randomized to the usual care group.

CRP is a marker of chronic inflammation and higher CRP levels have been associated with a higher risk of breast cancer mortality. A dose response effect was found in women randomized to weight loss counseling in that women who lost at least 5% body weight experienced an approximate 22% decrease in insulin, 38% decrease in leptin, and 55% decrease in CRP, compared to significantly less biomarker improvement in women randomized to weight loss who lost less than 5% body weight.

The second study consisted of analyzing the effect of exercise on weight, body fat, and serum inflammatory biomarkers in breast cancer survivors with joint pain (aromatase inhibitor arthralgias). Research participants were randomized into two groups: those who participated in twice-weekly strength training and 2.5 hr/wk of moderate-intensive aerobic exercise and the control group consisting of those who did no exercise. After 12 months, the study found that the exercise group experienced an approximate 3% weight and body fat loss, and 6% decrease in CRP levels compared to increases in the control group.

“The findings of both studies support a growing body of research that suggests lifestyle interventions lower biomarkers associated with breast cancer recurrence and mortality, and improve quality of life,” said Melinda Irwin, PhD, co-program leader of the Cancer Prevention and Control Research Program at Yale Cancer Center, associate professor of Epidemiology at Yale School of Public Health, and principal investigator on both studies.

A new study published in the Endocrine Society’s Journal of Clinical Endocrinology & Metabolism has revealed that tomatoes act as a preventative measure for breast cancer. Eating a diet high in tomatoes had a positive impact on the level of hormones that play a role in regulating fat and sugar metabolism. The women involved in this study ate tomato products containing 25 milligrams of lycopene on a daily basis for 10 weeks. For a separate 10 week period the study group consumed at least 40 grams of soy protein daily.
.
“The advantages of eating plenty of tomatoes and tomato-based products, even for a short period, were clearly evident in our findings,” said the study’s first author, Adana Llanos, PhD, MPH, who is an Assistant Professor of Epidemiology at Rutgers University. “Eating fruits and vegetables, which are rich in essential nutrients, vitamins, minerals and phytochemicals such as lycopene, conveys significant benefits. Based on this data, we believe regular consumption of at least the daily recommended servings of fruits and vegetables would promote breast cancer prevention in an at-risk population.”

When the effects of the tomato-rich diet were charted participants’ levels of adiponectin, a hormone involved in regulating blood sugar and fat levels, climbed 9 percent. The effect was slightly stronger in women who had a lower body mass index.

“The findings demonstrate the importance of obesity prevention,” Llanos said. “Consuming a diet rich in tomatoes had a larger impact on hormone levels in women who maintained a healthy weight.”

The researchers demonstrated that lifestyle changes associated with cruciferous vegetable intake during the first 36 months after breast cancer diagnosis had a significant impact on mortality rate, and breast cancer disease recurrence.

Survival rates were influenced by vegetable consumption in a dose-response pattern. As women ate more of these vegetables, their risk of death or cancer recurrence decreased.