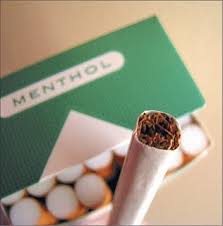 A Canadian study demonstrated the impact of smoking menthol cigarettes and determined teenagers who smoke menthol flavored cigarettes smoke more cigarettes per day than non-menthol smoking teens. The findings suggest that menthol flavored cigarettes enhance nicotine addition in Canadian youth. One in ten Canadian high school students from Grades 10-12 are smokers and the majority of long term adult smokers begin smoking during their teenage years. A survey from the nation youth smoking survey determined that menthol smokers make up 32 % of smokers in high school.

The European Union (EU) adopted a new Tobacco Products Directive in April 2014 that will result in 28 EU countries implementing a ban on menthol cigarettes. “The appeal of menthol cigarettes among youth stems from the perception that they are less harmful than regular cigarettes. The minty taste helps mask the noxious properties, but the reality is that they are just as dangerous as any unflavoured cigarette,” said Sunday Azagba, lead author on the paper.

The study published in the journal of Cancer Causes and Control found that menthol users smoked an average of 43 cigarettes a week, close to double the 26 smoked by non-menthol users. The future impact of smoking was also investigated and it was found that mental smokers were three times more likely to continue smoking in the following year.

“There is a growing concern that the high popularity of menthol cigarettes among youth may hinder the recent progress in preventing other young people from smoking because many of them may experiment with menthol rather than unflavoured brands,” said Azagba.

“Our findings indicate that youth smoking of menthol cigarettes is a serious concern,” said Azagba. “It’s clear moving forward that we need new laws to ban all added flavors in all tobacco products.”