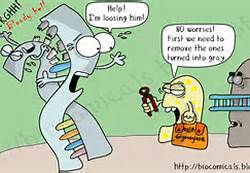 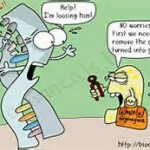 The research on DNA and their influence on the human body has undergone an evolution on of its own with new findings that DNA has two purposes. Now a new study has answered the age old question of where new genes come from.

Researchers at the University of California Davis have revealed that new genes are created from non-coding DNA at a rather rapid pace. The research was published in the Science Express and looked at RNA transcripts which corresponded to DNA genes in the testes of wild strains of the fruit fly and compares them to transcripts expressed in the standard reference sequence strains and two closely related species. The researchers found 248 new genes unique to the fruit fly, with over a hundred which were already spread throughout the fruit fly population. The genes were traced back from ancestrally non-coding DNA since the fruit fly split its evolution from its close relative D. simulans.

“This shows very clearly that genes are being born from ancestral sequences all the time,” said David Begun, professor of evolution and ecology at UC Davis and senior author on the paper.

“This is the first example of totally new genes still spreading through a species,” said Li Zhao, a postdoctoral researcher at UC Davis and first author on the paper.

“If it has a beneficial effect, then it gets selected,” she said. It’s difficult to say at this point how important this phenomenon is for generating new genetic material, Zhao said.

A new study, published in Nature Genetics, has displayed just how important non coding DNA is to increasing the risk of diabetes in the human population. The research has revealed how these regions can influence the risk of type 2 diabetes in over 300 million people worldwide and is one of the first to identify the function of these regions in increasing diabetic risk.
The scientists mapped the regulatory elements that control gene activity in the cell of the pancreas which produces insulin. Insulin is a hormone that regulates blood sugar.

“The cells that produce insulin appear to be programmed to behave differently in people with type 2 diabetes,” said co-author Mark McCarthy, a Wellcome Trust Senior Investigator at the University of Oxford. “This study provides some important clues to the mechanisms which are disturbed in the earliest stages of the development of type 2 diabetes, and may point the way to novel ways of treating and preventing the disease.”

“Many people have small DNA variants in such regulatory elements, and these variants affect gene expression in the cells that produce insulin. This knowledge will allow us to understand the detailed mechanisms whereby specific DNA variants predispose to diabetes,” said Professor Ferrer, the lead author of this study.