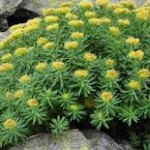 Depression affects approximately 19 million Americans each year. A new study, published in the journal of Phytomedicine, has revealed that roseroot may be an alternative natural treatment for major depressive disorder. This study represented the first randomized, double-blind, placebo-controlled, comparison trial of oral R. rosea (roseroot) extract versus the conventional antidepressant therapy sertraline for mild to moderate major depressive disorder.

The study participants consisted of 57 adults who were enrolled from December 2010 and April 2013 and were diagnosed with MDD (Major depressive disorder), and had two or more major depressive episodes, depressed mood and/or loss of interest or pleasure in life activities for at least 2 weeks, as well as symptoms including significant unintentional weight loss or gain, insomnia or sleeping too much, fatigue, and diminished ability to think or concentrate, and recurrent thoughts of death.