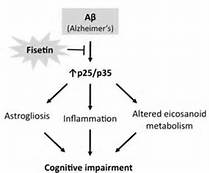 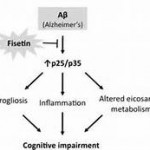 Fisetin is a natural plant compound chemical found in fruits and vegetables. Researchers at the Salk Institute of Biological studies found that the flavanol appears to stop the memory loss that accompanies Alzheimer’s disease in mice. The compound did not impact on the level and formation of amyloid plaques in the brain, characteristic of Alzheimer’s disease. Prior research has demonstrated that fisetin has both antioxidant and anti-inflammatory properties and protects neurons in the brain from aging.

“We had already shown that in normal animals, fisetin can improve memory,” says Pamela Maher, a senior staff scientist in Salk’s Cellular Neurobiology Laboratory who led the new study. “What we showed here is that it also can have an effect on animals prone to Alzheimer’s.”

“What we realized is that fisetin has a number of properties that we thought might be beneficial when it comes to Alzheimer’s,” says Maher.

“Even as the disease would have been progressing, the fisetin was able to continue preventing symptoms,” Maher says.

Maher’s research, in collaboration with the University of California in San Diego, tested the levels of different molecules in the brains of mice that had received doses of fisetin and those that hadn’t. One protein in particular — -known as p35 — -was blocked from being cleaved into a shorter version when fisetin was taken. The shortened version of p35 is known to turn on and off many other molecular pathways.

The next goal is to investigate the molecular pathways of fisetin’s impact and how it directly impacts on memory.

“It may be that compounds like this that have more than one target are most effective at treating Alzheimer’s disease,” says Maher, “because it’s a complex disease where there are a lot of things going wrong.”