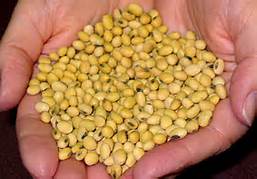 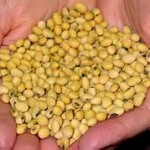 The world soybean production in 2011 was 251.5 million Metric tons,with the United States (33%), Brazil (29%), Argentina (19%), China (5%) and India (4%) as the main producing countries. In 2011–2012, soybeans were planted on about 30 million hectares in the USA, with Roundup Ready GM soy contributing 93–94% of the production. Also in the other leading producing countries, this same GM soy dominates the market accounting for 83% and 100% of production, respectively in Brazil and Argentina. Globally, Roundup Ready GM soybeans contributed to 75% of the total soy production in 2011.

This study exclusively examined the level of roundup residue contained in the actual soybeans and found glyphosate and AMPA (a glyphosate metabolite) at high concentration levels. In contrast, conventional and organic soybeans did not contain these chemicals.

Glyphosate is shown to be absorbed and translocated within the entire plant, and has been found in both leaf material and in the
beans of glyphosate tolerant GM soy plants. Monsanto has claimed that residues of glyphosate in GM soy are lower than in conventional soybean, where glyphosate residues have been measured up to 16–17 mg/kg, which likely must have been due to spraying before harvest (desiccation). Another claim has been that documented maximum residue levels up to 5.6 mg/kg in GM-soy represent ‘‘…extreme levels, and far higher than those typically found’’.

Seven out of the 10 GM-soy samples tested surpassed this ‘‘extreme level’’ of glyphosate + AMPA residues, indicating a development towards higher residue levels. The increased use of glyphosate on Roundup Ready soybeans in the US, contributing to selection of glyphosate-tolerant weeds with a response of increased doses and/or more applications used per season, may explain the observed plant tissue accumulation of glyphosate.

Recent studies have confirmed a high risk of dose dependent heart, kidney and skeletal malformations upon maternal exposure to the glyphosate herbicide. As there are currently no mandatory regulatory guidelines for genetic labeling in the US, pregnant women have no way of protecting their babies from maternal exposure, substantially increasing the risk for heart, kidney, skeletal and lung malformation.Numerous studies to date have documented the toxicity of commercial Roundup. Severe malformations have occurred in embryos of the South African clawed frog Xenopus laevis and chickens. In frogs, dilutions of 1/5000 of the formulation (equivalent to 430 μM of glyphosate) were sufficient to induce malformations, including shortening of the anterior−posterior axis, microcephaly, microphthalmia, cyclopia, and craniofacial malformations at tadpole stages. Embryos injected with pure glyphosate showed similar phenotypes, suggesting that glyphosate itself, was responsible for these developmental abnormalities. Roundup produced similar effects in chicken embryos, which showed a loss of rhombomere domains, reduction of the optic vesicles, and microcephaly.