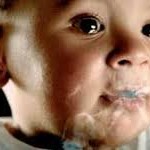 Another study, published in the journal Circulation, has highlighted the health impact of second hand smoke on children and determined that exposure to second hand smoke increases the risk of cardiovascular disease.

The study followed participants who took part in a study across five major Finish cities. The cardiovascular Risk in Young Finns Study was designed to examine the early-life risk factors of cardiovascular disease. Data was collected on childhood exposure to parental smoking between 1980-1983. Carotid ultrasound data were collected when the participants had reached adulthood in 2001 or 2007. In 2014, the researchers then measured the childhood blood cotinine levels of the participants, using samples collected and frozen in 1980. Cotinine is a major breakdown product of nicotine and can be used as a biomarker for exposure to secondhand smoke.