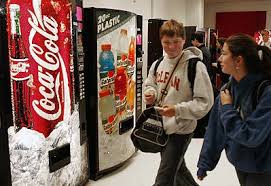 In a study which begs the outcry of NO KIDDING, it has been determined that consumption of sugary drinks and soda are the worst culprits in causing obesity. The study was conducted in Canada and involved 11,000 grade seven to twelve students in British Columbia and specified that sugary drinks like soda increased obesity more than junk food such as pizza, french fries, chips or candy.

The study was published in the International Journal of Behavioral Nutrition and Physical activity and determined that school children were more likely to be obese on the BMI scale in schools where sugary drinks are available.

“This study adds to the mounting literature that shows the high concentration of sugar in soft drinks contributes to obesity in adolescents,” said lead author Louise Mâsse, an associate professor in the University of British Columbia’s School of Population and Public Health, and a scientist at the Child & Family Research Institute at BC Children’s Hospital.

“Schools have an important role in promoting healthy dietary habits,” says Mâsse. “For example, students who are moderate consumers of these types of beverages were 60 per cent less likely to consume them in the schools that followed healthy nutrition guidelines.
“Creating an environment within the school that is more conducive to healthy eating will likely provide the greatest benefit in supporting healthy weights among adolescents.”

The British Columbia government released guidelines, in 2005, for healthy eating that recommended that sugary drinks not be sold in schools. The researchers suggest that full implementation of such a policy is vital to prohibiting obesity.