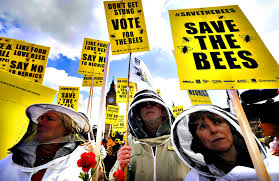 The government of Ontario Canada has proposed a plan to reduce the use of neonicotinoid treated corn and soybeans by 80% as part of a broad initiative to improve pollinator health. The catastrophic environmental impact of neonicotinoid pesticides has been increasingly recognized and the health proposal recommends the creation of a new class of pesticides to include seeds treated with pesticides.

The plan proposes the following:

Working towards a goal of 80 per cent reduction in the number of acres planted with neonicotinoid-treated corn and soybean seed by 2017.

Reducing the over-winter honeybee mortality rate to 15 per cent by 2020.

The adverse pollinator impact has been particularly pronounced in Ontario, as a winter loss survey from 2013-2014 found bee die-offs at 58%, the highest recorded level to date. Of commercial beekeepers surveyed, 56 out of 97 reported mortality rates greater than 50%.

The creation of a new class of pesticides to include seeds treated with pesticides would result in the restriction and use neonic-treated corn and soybean seed.

“Improving pollinator health is not a luxury but a necessity,” said Glen Murray, Ontario Minister of the Environment and Climate Change. “Pollinators play a key role in our ecosystem and without them, much of the food we eat would not be here. Taking strong action now to reduce the use of neurotoxic pesticides and protecting pollinator health is a positive step for our environment and our economy.”.

Health Canada weighed in last year with a report which declared the use of neonics in agriculture as “not sustainable.” Canadian officials have expressed the same concern with systemic neonic pesticides, which are persistent in soil, and can be continuously taken up by crops and expressed in pollen, nectar, and guttation (dew) droplets that plants produce.