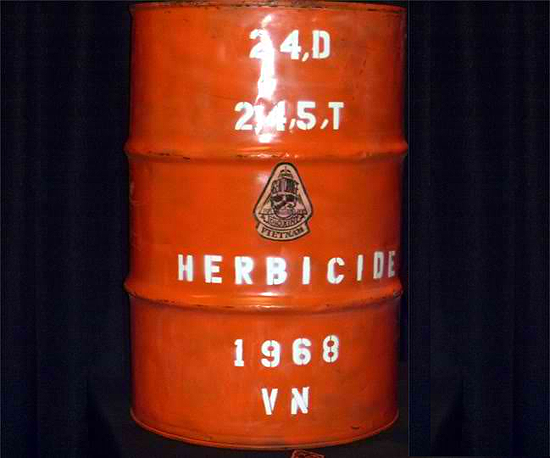 The USDA on the 3rd of January 2014 released its draft environmental impact statement as part of a review to determine whether to allow genetically engineered (GE) corn and soybean plants that are resistant to several herbicides including 2,4-D the main chemical found in Agent Orange. Public feedback can be provided at http://www.regulations.gov/#!docketDetail;D=APHIS-2013-0042. and the public review period is for 45 days from the date of publication in the Federal Register.

A corresponding petition has already gathered over 92,000 signatures against the introduction of agent orange in food http://salsa3.salsalabs.com/o/50865/p/dia/action3/common/public/?action_KEY=8850&track=FB&tag=FB

The toxic effects of 2,4-D are listed in the corresponding herbicide fact sheet www.panna.org/sites/default/files/24D-factsheet.pdf

Agent Orange is the name given to a potent herbicide and defoliant used by the US military during the Vietnam war from 1961-1971. The product is a 50/50 mixture of 2,4,5,-T and 2,4-D, the main ingredients, manufactured by Monsanto Corporation and Dow Chemical. Agent Orange has been associated with wide range toxic health effects ranging from cancer, leukemia, birth defects and other serious side effects and complications that to this day still plague Vietnam war veterans and the Vietnamese population directly targeted with the herbicide.

Monsanto has recently reached a proposed class action settlement, in February 2012, in the town in which agent orange originated.

The case was filed in 2008 on behalf of people who lived, worked and went to school in the small town of Nitro, West Virginia. For about two decades ending in 1971, Monsanto produced the herbicide 2,4,5-T there, which was used in Agent Orange. The lawsuit claims the company polluted the town with toxic substances, including dioxins, and asks the court to award medical monitoring for residents. The judge presiding over the case has placed a sweeping gag order on the case where details of the case are prohibited from being released. The suit claims poisonous residues from the chemical have polluted the area, putting residents’ health and the environment at serious risk. According to the Republic Broadcasting Network:

“Monsanto is alleged to have burned dioxin waste in open pits, spewing dioxin and its ash into the air and polluting land … The EPA recommended that Monsanto be criminally investigated for fraud in covering-up dioxin contamination in its products, including 2,4,5-T herbicide. Monsanto failed to report contamination, substituted false information to show no contamination or sent in ‘doctored’ samples of their products devoid of dioxin to government regulators.”

Monsanto has tentatively agreed to a $93 million settlement with some of the residents. The settlement would include $21 million for medical testing, $63 million for additional screening, and $9 million for the cleanup of 4,500 homes.

What are the toxic effects of 2, 4 -D and the concern of ingesting a GMO product that is resistant to the 2-4-D product? It raises the concern and the possibility that farmers will now begin spraying the herbicide year round to kill weeds also at the same lacing the GMO corn with agent orange. However, the possibility exists of transferring the 2,4-D resistance genes to other plants, nullifying the effect of trying to create a herbicide resistant plant, in particular as the pervasive contamination and spread of GMO products was documented by the Union of concerned scientist.

The Union of concerned scientists was the first organization to evaluate the impact of the transgenic contamination of GMO corn products in its 2005 report quite conclusively demonstrating that they found low levels of transgenically derived sequences in most of the samples of non-engineered corn, canola, and soybean seeds that were tested. Their results suggest that the contamination of traditional varieties of corn, soybeans and canola is pervasive and originates from genetic sequences originating predominantly form genetically modified plants.

What is the impact on the consumer?

Several research studies have documented the toxic effect of 2,4-D as follows:

In mammals, 2,4-D disrupts energy production (Zychlinkski & Zolnierowicz, 1990), depleting the body of its primary energy molecule, ATP (adenosine triphosphate) (Palmiera et al., 1994). 2,4-D has been shown to cause cellular mutations which can lead to cancer. This mutagen contains dioxins, a group of chemicals known to be hazardous to huma n health and to the environment (Littorin, 1994).

Other researchers publishing in the open scientific literature have reported oxidant effects of 2,4- D, indicating the potential for cytotoxicity or genotoxicity. For example, Bukowska (2003) reported that treatment of human erythrocytes in vitro with 2,4-D at 250 and 500 ppm resulted in decreased levels of reduced glutathione, decreased activity of superoxide dismutase, and increased levels of glutathione peroxidase. These significant changes in antioxidant enzyme activities and evidence of oxidative stress indicate that 2,4-D should be taken seriously as a cytotoxic and potentially genotoxic agent.

2,4-D causes slight decreases in testosterone release and significant increases in estrogen release from testicular cells (Liu et al., 1996). In rodents, this chemical also increases levels of the hormones progesterone and prolactin, and causes abnormalities in the estrus cycle (Duffard et al., 1995). Male farm sprayers exposed to 2,4-D had lower sperm counts and more spermatic abnormalities compared to men who were not exposed to this chemical (Lerda & Rizzi, 1991). In Minnesota, higher rates of birth defects have been observed in areas of the state with the highest use of 2,4-D and other herbicides of the same class. This increase in birth defects was most pronounced among infants who were conceived in the spring, the time of greatest herbicide use (Garry et al, 1996).

2,4-D also interferes with the neurotransmitters serotonin and dopamine. In young organisms, exposure to 2,4-D results in delays in brain development and abnormal behavior patterns, including apathy, decreased social interactions, repetitive movements, tremor, and immobility (Evangelista de Duffard et al, 1995). Females are more severely affected than males. Rodent studies have revealed a region-specific neurotoxic effect on the basal ganglia of the brain,resulting in an array of effects on critical neurotransmitters and adverse effects on behavior (Bortolozzi et al., 2001).

A peer-reviewed, developmental neurotoxicity study demonstrated severe neurotoxicity in young rats exposed to 2,4-D from postnatal days 12 to 25 at doses of 70 mg/kg/day. These pups showed decreases in GM1 level, diminution in myelin deposition and alterations in all behavioral tests at all doses (Rosso et al, 2000). This herbicide specifically appears to impair normal deposition of myelin in the developing brain (Duffard et al., 1996). The neurotoxic and anti thyroid effects of 2,4-D make it highly likely that fetuses, infants, and children will be more susceptible to long term adverse health effects from exposure to this chemical although they may appear normal at birth.

Young animals can also be exposed to 2,4-D through maternal milk. Recent research has revealed that 2,4-D is excreted in breast milk, thereby resulting in potentially significant exposures to the nursling. The researchers detected 2,4-D residues in stomach content, blood, brain and kidney of 4-day-old neonates fed by 2,4-D exposed mothers (Sturtz et al., 2000). When maternal exposures stopped, the chemical continued to be excreted in maternal milk for a week. Thus, postnatal exposures to this chemical during the critical period for development of the infant brain are of serious scientific concern.

Australia has recently banned the use of Agent Orange as a herbicide, (http://foodexposed.co.za.www100.jnb2.host-h.net/australia-bans-agent-orange-with-immediate-effect), yet the USDA wants to allow the chemical to be added to the food supply through the use of genetically modified crops.

Bukowska B. Effects of 2,4-D and its metabolite 2,4-dichlorophe nol on antioxidant enzymes and level of glutathione in human erythrocytes. Comp Biochem Physiol C Toxicol Pharmacol, 2003, 135(4):435-41.

Hardell L, Eriksson M. Is the decline of the increasing incidence of non-hodgkins lymphoma in Sweden and other countries a result of cancer preventive measures? Environ Health Perspect, 2003, 111(14):1704-6.

Hayes HM, RE Tarone and KP Cantor. On the Association between Canine Malignant Lymphoma and Opportunity for Exposure to 2,4-Dichlorophenoxyacetic Acid. Environmental Research, 1995, 70(2):119-125.