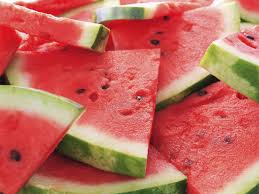 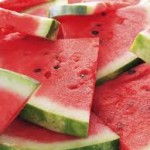 Just in time for summer another study is touting the health benefits of watermelon and its ability to significantly lower blood pressure in overweight individuals.

“The pressure on the aorta and on the heart decreased after consuming watermelon extract,” Professor Arturo Figueroa the lead study author said. The study was published in the American Journal of Hypertension and analyzed 13 middle aged obese men and women who suffered from blood pressure. It was previously found that cold weather condition increased the risk of heart attack as it increased blood flow to the heart. To simulate cold weather conditions, one hand of the subject was dipped into 39 degree water (or 4 degrees Celsius) while Figueroa’s team took their blood pressure and other vital measurements.

The participants were divided into groups of two, with one group receiving placebos for 6 weeks; and the other group was administered four grams of the amino acid L-citrulline and two grams of L-arginine per day, both from watermelon extract. The placebo and test group were switched after six weeks.

The study findings conclusively demonstrated that consuming watermelon had a positive impact on aortic blood pressure and other vascular parameters, revealing improvements in blood pressure and cardiac stress while both at rest and while they were exposed to the cold water.

“That means less overload to the heart, so the heart is going to work easily during a stressful situation such as cold exposure,” Figueroa said.

A previous collaborative study involving watermelon revealed that consuming watermelon juice caused the test animals involved to have a lower body weight due to a decrease in fat mass. In addition plasma cholesterol concentrations were significantly lower in the experimental group, with modestly reduced intermediate and low-density lipoprotein cholesterol concentrations as compared to the control group.