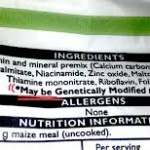 Woolworths, South Africa, has specified that it intends to cut back on genetically modified GMO products by 50% and that the shift from selling food with 5.7% to 2.7% will take place by July 2015.

“Many of our customers have told us that they would prefer not to buy products that may contain ingredients from GM crop sources, and we respect their wishes,” said Woolworths Managing Director for Foods Zyda Ryland.

The Journalist reports that South African consumer groups are skeptical and critical of the store’s announcement.

“We were delighted when in 1999 Woolworths publicly committed to eliminate genetically modified ingredients wherever possible and to work hand-in-hand with suppliers to do so. We had applauded their stand hoping that they would lead other retail stores to do the same. We were hugely taken aback to find five years later, 79% GM maize in Woolworths Super Maize meal and 86% GM soya in the soya flour used in Woolworths White Bread. More disappointing was the misuse of the ‘May be Genetically Modified label in clear violation of their stated policy to label products containing GM ingredients where these product could not be removed,” said Haidee Swanby, Researcher at the African Centre for Biosafety.

“That Woolworths is now promising to halve the number of products that contains ingredients derived from genetically modified organisms certainly seems like a step back. Retailers like Woolworths have the buying power to demand non-GM ingredients and shift the status quo significantly. “Monsanto dominates the GM seed market in South Africa, whose patents require farmers to pay a license fee for the technology and restricts them from saving or sharing seed. The licensing agreement also requires farmers to use the glyphosate herbicide called Roundup. The body of evidence against glyphosate is building up, raising more concerns about the ubiquitous adoption of GM crops,” said Swanby.

The Journalist questioned Woolworths’ commitment and mentioned that the current policy statement differs only marginally from the one issued in 1999. Woolworths’ respondent: “We announced our intention to avoid or label GMO products in 1999. Government support for GM crops in South Africa and its international proliferation in the agricultural sector has made it very difficult to source non GMO crops at affordable prices for our customers (86.6% of maize and 92% of soya are genetically modified in South Africa). Due to this difficulty, the number of GMO products increased to 5.3% of Woolworths foods. We are in the process of conducting extensive research to find affordable alternatives. We can currently commit to a 50% reduction of products containing GM ingredients over the next year,” said Neeran Naidoo, the Corporate Communication Manager for Woolworths Marketing.