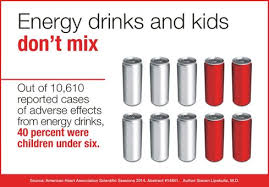 The American Heart Association has presented its newest research at its 2014 meeting calling it the tip of the iceberg. The data represents analyzed records from the American Association of Poison Control Centers’ National Poison Data System over a three year period.

Energy drinks represent 40 % of the reports involving children younger than 6 with serious cardiac and neurological symptoms. Of the 5,156 reported cases of energy drink exposure, 40 percent were unintentional, (i.e. unforeseen or unplanned) exposures by young children. Moderate to major outcomes were reported in 42 percent of cases involving energy drinks that had been mixed with ethanol (alcohol) and in 19 percent of non-alcohol-containing energy drinks.

Cardiovascular events (including abnormal heart rhythm and conduction abnormalities) were reported in 57% of cases and 55% of cases included neurological including seizures and status epilepticus.

Energy drinks containing diverse caffeine sources were linked to a higher rate of side effects including the nervous, digestive or cardiovascular systems. Some energy drinks contain up to 400 milligrams (mg) of caffeine per can or bottle, four times the amount typically found in a cup of coffee.

Caffeine poisoning can occur at levels higher than 400 mg a day in adults; above 100 mg a day in adolescents; and at 2.5 mg per kilogram (2.2 pounds) of body weight in children younger than 12, he said.

Researchers recommend improved labeling for caffeine containing products including efforts to decrease exposure of young children to these products.