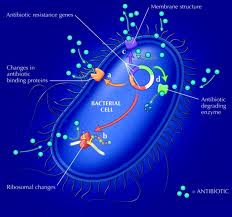 A new study publicized in PLOS ONE has analyzed the level of antibiotic resistant genes found in the intestinal tract of American children under the age of five.

“From birth to age 5, children receive more antibiotics than during any other five-year time span in their lives,” said senior author Gautam Dantas, PhD, assistant professor of pathology and immunology. “Frequent exposure to antibiotics accelerates the spread of antibiotic resistance. Our research highlights how important it is to only use these drugs when they are truly needed.”

“Microbes have been battling each other for millennia, regularly inventing new antibiotic synthesis genes to kill off rivals and new antibiotic resistance genes to defend themselves,” Dantas said. “That microbial arms race is where this vast array of genetic resources comes from.”

The researchers analyzed the intestinal microbial DNA from the children against 18 antibiotics. The genes they identified impaired the effectiveness of all but four of the drugs. Many of the resistance genes were found clustered on sections of DNA that can easily jump from one microbe to another.

“There were quite a few resistance genes in microbes from every child we looked at,” Dantas said. “This was true even in children who were only six months old. When we compared their resistomes (collective antibiotic resistance genes of a microbial community) to those of older children, there didn’t seem to be much difference.”

“This study gives us a snapshot of antibiotic resistance genes at single points in different children’s lives,” he said. “We’re now analyzing the resistome’s development via samples taken from the same children at multiple points in their lives.”

According to a recent report by the Centers for Disease Control and Prevention, antibiotic-resistant infections cause at least 2 million illnesses and 23,000 deaths annually, adding $20 billion in health-care costs. Dantas pointed out that methicillin-resistant Staphylococcus aureus, one of the most dangerous antibiotic-resistant bacteria, now causes more deaths in the United States than HIV.