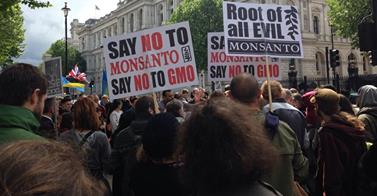 A large number of organizations have joined to announce that Monsanto, (a US based global organization), will be placed on trial for crimes against nature, humanity and ecocide on World Food Day, October 16th 2016.

The organizations, the Organic Consumers Association (OCA), IFOAM International Organics, Navdanya, Regeneration International (RI), and Millions Against Monsanto, joined by dozens of global food, farming and environmental justice groups are relying on the “Guiding Principles on Business and Human Rights” adopted by the UN in 2011 to assess the criminal liability of Monsanto for damages inflicted on human health and environment.

On the 10th of September 2015 a French appeal court issued a ruling upholding the 2012 decision of a French trial court awarding damages to a cereal farmer.

The farmer, Paul Francois, said he suffered damages to his health while applying Lasso, (a Monsanto herbicide), on his maize crap.

The appeal court specified that that Monsanto was “responsible” for poisoning the farmer with its Lasso weedkiller and ordered the US biotech giant to fully compensate Francois.

Lasso is marketed as alachlor in the US and the EPA data sheet reveals significant health problems associated with the herbicide. Alachlor was the second most widely used herbicide in the United States, with particularly heavy use on corn and soybeans in Illinois, Indiana, Iowa, Minnesota, Nebraska, Ohio, and Wisconsin

Monsanto has been banned from cultivating it’s genetically engineered Mon 810 Corn variety by the Lazio Regional Administrative court in Italy, which rejected Monsanto’s appeal, as an emergency measure. The ban came as a result of a law suit initiated by Monsanto and used the precautionary principle as the basis for its ruling.

The decree recognizes the risk to the environment and the unknown consequences of genetically modified organisms and states the following: “When there is uncertainty as to the existence or extent of risks to the health of the people protective measures may be taken without having to wait until the reality and seriousness of those risks. Therefore, the challenged decree reflects in full the conditions laid down for the application of the precautionary principle, including testing negative consequences for the environment”.

Seventy six percent of Italians support a ban on genetically modified organisms (GMOs) in the country as does the minister of the environment Gian Luca Galletti who stated the following:

“The decision of Lazio Regional Administrative court endorses the actions of the government, to increase the decision-making autonomy of the Member States relating to GMOs. Now this ban should be implemented with the decision, and penalties allocated for any violation. The environmental ministry has been on the forefront of this issue and has worked closely with the Departments of Health and Agriculture representing the current positive result.

The Minister of the Environment also pushed a new European law that leaves full autonomy to make decisions relations to a state’s traditions and agricultural practices to European Union member states.

In contrast to the United States, Monsanto is not viewed favorably by the legal system in other countries where groundbreaking litigation has curbed the trend to steam roller over farmers. A Chilean farmer has achieved the seemingly improbable and has won a CLP$ 37 million lawsuit against Monsanto for breach of contract.

The coordinator for Chile’s Pesticide action network learned about the farmer’s experience in September 2013.

“This farmer did not know exactly what he was planting, he had no idea what a GMO seed was; the contract stated a fantasy name, Mon49 maize. He was compelled to an intensive use of more than 10 hazardous pesticides, harmful for health and the environment. The contract he signed forced him to turn only to the Chamber of Commerce in case of disagreement, he could not file lawsuits in local courts. He explained to us that many producers also have had problems with Monsanto, but they don´t turn to the Chamber because it is too expensive,” said María Elena Rozas, coordinator for Red de Acción en Plaguicidas(Pesticide Action Network) RAP-Chile.

The judgment was affirmed by the Court of Appeal who rejected Monsanto’s appeal.The judgment was entered by Judge Francisco Gazmuri Schleyer, a Chamber of Commerce arbitration judge, in case 1385-11 “Agrícola Pizarro Ltda. con Agrícola Nacional S.A.C”, who found that ANASAC/Monsanto failed to comply with its obligation “which consists in providing services of technical supervision of the sowing in a dilligent manner and giving strict compliance to the manufacturer´s instructions for Monsanto´s seed”.

The farmer received the payout at the end of December but claims it is not enough to compensate for the damages that he has suffered as he lost his house, his crop spraying machine, a tractor, his pick-up truck and his wife left him. In addition he was in debt to Banco Santander, a local bank, to the tune of CLP$90 million after growing Monsanto´s GMO maize in Melipilla for ANASAC. He has been placed on the transnational black list as a result of the lawsuit.

“What happened to this farmer may be an example for hundreds of small farmers, seduced by big earnings and fair treatment promises by corporations which export GMO seeds. But the profit is real only at the beginning. The great majority of the defrauded do not report and make themselves dependent on what the corporation offers, which becomes less every day. And there are not many alternatives for farmers, due to the lack of rural public policies or incentives that effectively favor agroecologic production. We must change this,” said María Elena Rozas.

A recent peer-reviewed study released in the US has described in detail the effect of Roundup, (the Monsanto developed herbicide), on the health of the consumer public.

The study revealed the contributing impact of Roundup on gastrointestinal disorders, obesity, diabetes, heart disease, depression, autism, infertility, cancer and Alzheimer’s disease and states that “glyphosate enhances the damaging effects of …food borne chemical residues and environmental toxins”. Negative impact on the body is insidious and manifests slowly over time as inflammation which damages cellular systems throughout the body.

Glyphosate, the active ingredient in Roundup®, is the most popular herbicide used worldwide. The industry asserts it is minimally toxic to humans, but the peer reviewed study argued otherwise. Residues are found in the main foods of the Western diet, comprised primarily of sugar, corn, soy and wheat. Glyphosate’s inhibition of cytochrome P450 (CYP) enzymes is an overlooked component of its toxicity to mammals. CYP enzymes play crucial roles in biology, one of which is to detoxify xenobiotics. Thus, glyphosate enhances the damaging effects of other food borne chemical residues and environmental toxins. Negative impact on the body is insidious and manifests slowly over time as inflammation damages cellular systems throughout the body and the study revealed the interference with CYP enzymes and how they act synergistically with disruption of the bio- synthesis of aromatic amino acids by gut bacteria, as well as impairment in serum sulfate transport. Consequences are most of the diseases and conditions associated with a Western diet, which include gastrointestinal disorders, obesity, diabetes, heart disease, depression, autism, infertility, cancer and Alzheimer’s disease.

Ronnie Cummins, international director of the OCA (US) and Via Organica (Mexico), and member of the RI Steering Committee, said: “The time is long overdue for a global citizens’ tribunal to put Monsanto on trial for crimes against humanity and the environment. We are in Paris this month to address the most serious threat that humans have ever faced in our 100-200,000 year evolution—global warming and climate disruption. Why is there so much carbon dioxide, methane and nitrous oxide in the atmosphere and not enough carbon organic matter in the soil? Corporate agribusiness, industrial forestry, the garbage and sewage industry and agricultural biotechnology have literally killed the climate-stabilizing, carbon-sink capacity of the Earth’s living soil.”

Vandana Shiva, physicist, author, activist and founder of Navdanya, and member of the RI Steering Committee said: “Monsanto has pushed GMOs in order to collect royalties from poor farmers, trapping them in unpayable debt, and pushing them to suicide. Monsanto promotes an agro-industrial model that contributes at least 50 percent of global anthropogenic greenhouse gas emissions. Monsanto is also largely responsible for the depletion of soil and water resources, species extinction and declining biodiversity, and the displacement of millions of small farmers worldwide.”

Andre Leu, president of IFOAM and a member of the RI Steering Committee, said: “Monsanto is able to ignore the human and environmental damage caused by its products, and maintain its devastating activities through a strategy of systemic concealment: by lobbying regulatory agencies and governments, by resorting to lying and corruption, by financing fraudulent scientific studies, by pressuring independent scientists, and by manipulating the press and media. Monsanto’s history reads like a text-book case of impunity, benefiting transnational corporations and their executives, whose activities contribute to climate and biosphere crises and threaten the safety of the planet.”

Marie-Monique Robin, journalist and author of the best-selling documentary (and book by the same name), “The World According Monsanto,” said: “This International Citizens’ Tribunal is necessary because the defense of the safety of the planet and the conditions of life on Earth is everyone’s concern. Only through a collective resurgence of all living forces will we stop the engine of destruction. That’s why today I am calling on all citizens of the world to participate in this exemplary tribunal.”