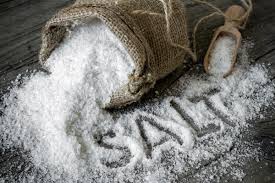 A new study, published by the Centers for Disease Control and Prevention (CDC) in the Morbidity and Mortality Weekly report, has specified that more than 90% of children and 89 % of adults aged 19 and older exceed the 2015-2020 dietary guidelines for Americans. The guidelines recommend limiting sodium to less tan 2,300 mg per day for people over the age of 14 and far less for younger people.

Excess salt consumptions is linked to chronic health conditions including heart disease and the following statistics suggest a health concern. One in three U.S. adults, approximately 70 million people, have high blood pressure and only half have it under control. Heart disease, stroke, and other cardiovascular diseases kill more than 800,000 Americans each year and cost nearly $320 billion a year in health care and lost productivity.

Among adults, a larger proportion of men (98 percent) than women (80 percent) consume too much sodium.
About 90 percent of adult whites consume excess sodium compared with 85 percent of blacks.
Estimated sodium and calorie consumption peaks between the ages of 19 and 50.
Among people at greater risk of developing heart disease or stroke – such as people age 51 and older, African Americans and individuals with high blood pressure or pre-hypertension (blood pressure higher than normal but not in the “high” range) – more than three out of four exceed 2,300 mg per day.
Adults with hypertension consume slightly less sodium than other adults, and may be trying to follow physicians’ advice to reduce sodium. However, 86 percent of adults with hypertension still consume too much.

“The finding that nine of ten adults and children still consume too much salt is alarming,” said CDC Director Tom Frieden, MD, MPH. “The evidence is clear: too much sodium in our foods leads to high blood pressure, a major risk factor for heart disease and stroke. Reducing sodium in manufactured and restaurant foods will give consumers more choice and save lives.”

The data used for the research analysis originated form the 2009-2012 National Health and Nutrition Examination Survey (NHANES) which calculated how much salt Americans are eating. The research participants consisted of 15,000 people.

“Sodium reduction is a key part of preventing heart disease and stroke,” said Sandra Jackson, an author of the report and an epidemiologist in CDC’s Division for Heart Disease and Stroke Prevention. “Reducing sodium is an achievable and effective strategy to improve heart health for everyone, but it’s going to take all of us working together to make it possible.”