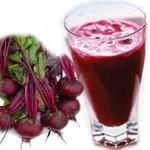 A study by the Wake Forest University’s Translational Science Center has examined the powerful impact of beetroot juice on chronic pulmonary disease (COPD) patients. COPD causes shortness of breath and patients have a hard time breathing; it worsens over time.

“The intent of this study was to determine if acute ingestion of beetroot juice, which is rich with nitrates, prior to exercising could improve the exercise capacity of COPD patients,” said Michael Berry, who is the primary investigator and lead author of the study.

Although the study population was small and requires a larger scale study the research findings are promising. Researchers recruited COPD patients who filled out health status questionnaires, had a brief medical examination and completed an incremental exercise test on a stationary bicycle to determine their maximal exercise work rate. The second visit one week later consisted of additional pulmonary function and lung volume testing, as well as a familiarization exercise test on an exercise bicycle at 75 percent of the patients’ previously determined maximal work rates.

The visits were performed at a similar time in the morning and the beetroot juice or placebo juice, about three ounces of each, was ingested two-and-a-half hours before the final two visits. Prune juice was used as the placebo because it contains similar amounts of carbohydrates, sugars and fats, but does not contain any nitrates. How long patients exercised during the third and fourth visits was recorded.