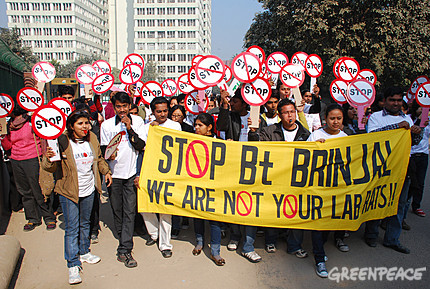 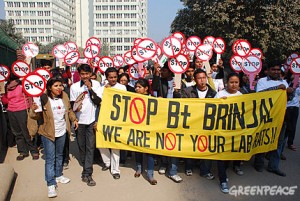 A court of Appeals in the  Philippines stopped field trials of Bt eggplants.

The Bt eggplant, also known as aubergine, is genetically modified to contain a ‘built-in’ quantity of bacillus thuringiensis, a pesticide and consumer advocates and environmental groups opposed the plant as its effects on human consumers were not demonstrated to be safe and it kills pests that are necessary for other living organisms to flourish in soil.

In its decision announced today, the court ordered the respondents to “permanently cease and desist” from further conducting field trials and “protect, preserve, rehabilitate and restore the environment in accordance with the foregoing judgment of the court.”

Greenpeace has played a proactive role in facilitating this decision. “We commend the Court of Appeals for living up to its constitutionally mandated role as protector of constitutional rights,” said Daniel Ocampo, Greenpeace Southeast Asia Sustainable Agriculture Campaigner.

He said the decision reflects that there are indeed flaws and lapses in the current regulatory process for genetically modified organisms such as Bt eggplant which exposes the environment and people’s health to “unknown long term consequences and does not establish their safety in any way.”

The governments of 26 countries including India, China and Thailand have banned the release of genetically modified crops into their environments and their importation for food processing.

Ocampo said the decision made by the Court of Appeals will have a resounding impact on the future of agriculture and food production in the Philippines.

“Flaws in the government regulations have led to the sad state we are in, with 62 GMOs imported and fed to Filipinos without their knowledge and consent. The environment and our farmers are exposed to eight kinds of GMOs that are allowed for propagation, without knowing their long-term impacts,” he said.