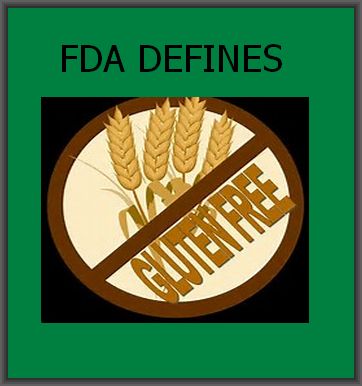 The Food and Drug Administration, (FDA), in the United States has finally defined the type of characteristics contained in a “gluten free” label. Gluten refers to a protein that occur naturally in wheat, rye, barley, and varieties of these grains.

The rule holds foods labeled “without gluten,” “free of gluten,” and “no gluten” to the same standard with a gluten limit of less than 20 ppm (parts per million) to qualify as gluten free.

Advocates for people with celiac disease have been requesting a standard from the FDA for years and as many as 3 million people in the United States have celiac disease. It occurs when the body’s natural defense system reacts to gluten by attacking the lining of the small intestine. Without a healthy intestinal lining, the body cannot absorb the nutrients it needs. Delayed growth and nutrient deficiencies can result and may lead to conditions such as anemia (a lower than normal number of red blood cells) and osteoporosis, a disease in which bones become fragile and more likely to break. Other serious health problems may include diabetes, autoimmune thyroid disease and intestinal cancers.

In addition to limiting the unavoidable presence of gluten to less than 20 ppm, FDA will allow manufacturers to label a food “gluten-free” if the food does not contain any of the following:

Food manufacturers have one year from publication (August 5th 2013) to bring their labels into compliance. Under the new rule, a food label that bears the claim “gluten-free,” as well as the claims “free of gluten,” “without gluten,” and “no gluten,” but fails to meet the requirements of the rule would be considered mislabeled and be subject to regulatory action by FDA.