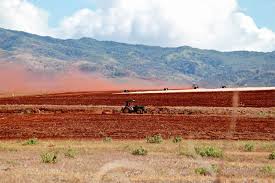 Fifteen Kaua’i residents had launched a lawsuit against Dupont citing property damage and loss of use and enjoyment of their property. The basis of the complaint was the Waimea Research field and the increased exposure to red dust contaminated with pesticide. The injunction, based on a 7 member jury, awarded damages citing “seriousness of harm to each plaintiff outweighs the public benefit of Pioneer’s farming operation.” The amount of damages included $191,315 for property damage and $315,775.

Kauai, along with other islands and states have been locked in a legal battle with the biochemical company directed at limiting the residents exposure to the pesticides prayed on genetically modified crops. The defense raised by chemical companies cites that local government ordinances have no relevance and do not preempt state or federal law.

The Hawaii community and other counties are battling with the implementation of federal regulations which harm local city governments and cause environmental devastation. “Withdraw the lawsuit from the County of Kauaʻi, honor and comply with our laws. Treat us with the same respect, the same dignity and the same protections that you give the people of Switzerland. Do not spray chemicals in my community that you cannot spray in your own community,” Councilmember Hooser said. The Councilmember was referencing the use of the herbicides atrazine and paraquat, chemicals which are banned from use in Switzerland, but sprayed constantly and even found in drinking water in Hawaii communities.

“What we can say about our role on Kauai is that Syngenta has been part of the community on Kauai for more than 40 years providing jobs and other benefits to the rural economy since sugar cane and pineapple production declined,” Syngenta spokesman Mark Phillipson wrote in an email to The Garden Isle. “The island offers unrivaled climatic and agronomic conditions for crop research, which has benefited millions of growers around the world. We take very seriously our responsibility toward Kauai’s natural environment and the communities where we work.”

In response to the Dupont Pioneer ruling, he added, “The façade presented through the “Good Neighbor” persona created by the community relations and media guru’s of these companies is quickly evaporating.”