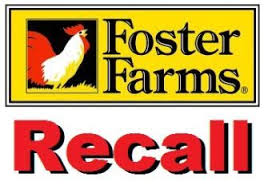 On the third of July the USDA (U.S. Department of Agriculture) stated that they had “conclusive evidence” linking Salmonella Heidelberg in Foster Farms chicken to illnesses caused by the consumption of meat. The USDA’s Food Safety and Inspection Service (FSIS) had previously stated said there was no confirmed link to the tainted poultry and some 574 Salmonella Heidelberg illnesses that have spread over 27 states since March 2013.

Foster Farm is voluntarily recalling contaminated chicken linked to the salmonella outbreak and include products originating from its plant in central California. The salmonella strains connected to the outbreak have been identified in nearly 600 cases in 27 states and Puerto Rico and the producst under recall were distributed in California, Hawaii, Washington, Arizona, Nevada, Idaho, Utah, Oregon and Alaska.

The Center for Disease control has reported a total of 621 persons infected with seven outbreak strains of Salmonella Heidelberg. Most of the cases (77 %) originate from California.

The outbreak strains of Salmonella Heidelberg are resistant to several commonly prescribed antibiotics. Although these antibiotics are not typically used to treat Salmonella bloodstream infections or other severe Salmonella infections, antibiotic resistance can be associated with increased risk of hospitalization in infected individuals.

One thought on “Foster Farm recalls chicken due to Salmonella outbreak that has sickened 621 people.”