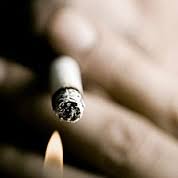 Two naturally occurring variants in the area of the genome that initiates expression of genes linked to nicotine use have been identified. A new study, published by researchers at Penn State and University of Colorado, has identified how small differences in a particular region of the mouse genome can alter nicotine consumption.

The naturally occurring variant of the beta-3 subunit of nicotinic acetylcholine receptors — the major allele — are more likely to cause problems with nicotine use. People who have the minor allele, the less common version, are protected against nicotine dependence and the expression of the minor allele results in less beta-3 protein being produced. There are three differences in the DNA sequence in the area involved in turning on nicotine-related genes

Mice, genetically engineered, who were lacking one or both copies of the gene encoding the beta-3 subunit consumed less nicotine than normal mice suggesting that other genetic factors also play a role in nicotine cravings. By individually reversing each of the three genetic differences in the minor allele in mouse cells in culture, the researchers found that only one of the three differences reduced the amount of beta-3 protein the cells produced.