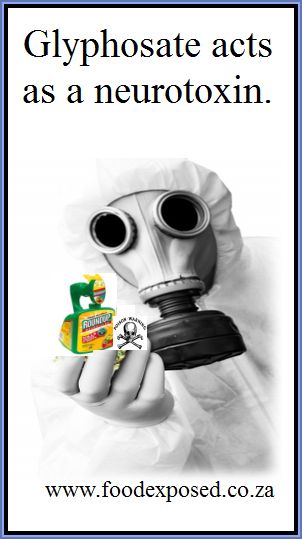 The results found that acute exposure to Roundup induces calcium influx into neurons (primarily, by activating NMDA receptors and voltage-dependent Ca2+ channels), leading to oxidative stress and neural cell death. They also found that the herbicide affected the enzymes ERK and CaMKII, the later of which is an enzyme whose dysregulation has been linked to Alzheimer’s disease. Additionally, acute exposure was observed to have the following three effects:

1. Increase the amino acid glutamate into the junctions through which neurons communicate (synaptic cleft), which, when released in excess levels, can exert excitotoxic/neurotixc effects in neurons.
2. Decrease the neuroprotective antioxidant glutathione.
3. Increase ‘brain rancidity,’ i.e. lipoperoxidation, characterized by excitotoxicity (over-stimulation of the neurons) and oxidative damage.

Previous studies have correlated pesticide exposure to Parkinson’s disease and other neurological diseases. Researchers from the University of California have found that the risk to Parkinson is increased by exposure to pesticide. The risk of the disease is dependent on an individual’s genetic make up which can increase the risk for developing Parkinson’s disease. The study was published in the Journal of Neurology and also found that people with a modified genetic variant of the ALDH2 gene, (the gene implicated in increasing the risk of Parkinson), are particularly sensitive to the effects pesticides that inhibit the gene.

The studies are especially concerning in light of the trend to produce genetically modified organisms that have been engineered to be pesticide resistant and which have been linked to increased pesticide exposure and application.