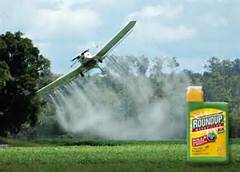 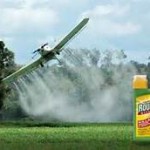 A study published in the journal of Environmental Toxicology and Chemistry revealed that glyphosate, the main ingredient found in the herbicide Roundup, was found in over 75% of air and rain samples tested in Mississippi in 2007.

The study is disconcerting as it reveals that involuntary exposure to the herbicide is worse than previously thought. Other reports confirm that exposure is not confined to one region but occurs on a global level. It has been calculated that about 0.7% of the glyphosate applied in agricultural areas is removed from the air in rain.

Glyphosate was first synthesized in Switzerland in 1950, then developed as a herbicide by Monsanto in 1970. The global production capacity is about 1.1 million tonnes, with China’s capacity alone being 835,900 tonnes.

According to the report, thirty-seven compounds were detected in the air or rain samples in 2007; 20 of these were present in both air and rain. Glyphosate was the predominant new herbicide detected in both air (86%) and rain (77%) in 2007, but was not measured in 1995.

A one-year monitoring project of three wastewater treatment plants and one composting unit in France detected glyphosate and AMPA in all samples of sludge. Glyphosate and AMPA were found in tributaries of the river Ruhr in Germany in the 1990s at up to 590 ng/L; in 54% of surface water samples in Norway in the late 1990s at up to 0.93 µg/l glyphosate and 0.2 µg/L AMPA; and in elevated levels in surface water, soil and sediment samples in Argentina as a result of GM soy cultivation.

Glyphosate was found in the groundwater in 11 different locations in Catalonia, Spain. It was detected in 41% of 140 samples, at concentrations as high as 2.5 µg/L, 25 times the legal limit for drinking water in the EU.

Detectable concentrations of glyphosate and AMPA were found in marine sediment at a number of sites in the Waitemata Harbour and Hauraki Gulf in New Zealand. The maximum glyphosate concentration detected was 1 ppm, while AMPA had a maximum level of 0.37 ppm.

Previous studies have documented the chronic and mutagenic impact of Roundup. Roundup kills embryonic kidney cells at levels 200-fold lower that those recommended for agricultural use. Four Roundup formulations caused cell death in human liver cell lines, at concentrations described as “far below those used in agriculture”, and also below those legally allowed as residues in GM food.

Doctors in Argentina have reported a dramatic upsurge in long-term effects in areas where genetically modified soy crops are aerial sprayed with glyphosate. They include cancer, infertility, pregnancy problems, birth defects, and respiratory diseases.

A report released by Argentina’s Chaco state government in April 2010 refers to a significant increase in cancer in La Leonesa, an agricultural town, including a 3-fold increase in childhood cancers, particularly leukaemia, lymphoma, and brain tumors, coinciding with the dramatic increase in transgenic crops such as soy which are heavily sprayed with glyphosate.

Birth defects in the Argentinean state of Chaco, where GM soy and rice crops are heavily sprayed with glyphosate, increased nearly fourfold over the years 2000 to 2009, according to a report released by the Chaco state government. Several cases of malformations together with repeated spontaneous abortions were detected in the village of Ituzaingó [Cordoba], which is surrounded by GMO-based agriculture”.

In 2009, Argentinean researchers lead by Professor Carrasco showed that 1/5000th of the concentration of commercial glyphosate disrupted the development of the craniofacial skeleton. The malformations occurred at 2.03 mg/kg glyphosate; residues have been found
in soybeans up to 17 mg/kg. The glyphosate caused marked alterations in cephalic and neural crest development and shortening of the anterior-posterior axis in tadpole embryos, resulting in deformities in the cranial cartilages at the tadpole stage. Other effects included shortening of the trunk, reduced head size, and eye defects; and the authors concluded their results were “compatible with the malformations observed in the offspring of women chronically exposed to glyphosate-based herbicides during pregnancy”.

Chang F-C, Simcik MF, Capel PD. 2011. Occurrence and fate of the herbicide glyphosate and its degradate aminomethylphosphonic acid in the atmosphere.