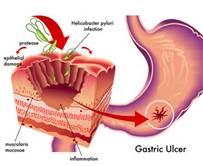 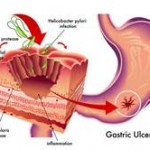 Fifty percent of stomach ulcers are caused by a bacteria that has the ability to alter the human immune system. Helicobacter pylori is a bacterium that establishes a life-long stomach infection in humans, linked to ulcers or stomach cancer.

The bacteria acts by suppressing the human body’s natural production of an antimicrobial agent called human beta defensin 1, (hβD1). By collecting stomach tissue biopsies from 54 patients at the Queens Medical Center, Nottingham, the University of Nottingham team showed that patients infected with H. pylori had ten times less hβD1 than uninfected patients. Those patients containing the lowest amount of hβD1 had the most bacteria present in their stomach lining.

There are strains of bacteria that form a molecular syringe called cagT4SS, through which bacterial products are injected into cells lining the stomach. The purpose is to activate chemical pathways to suppress hβD1 production. The H. pylori bacteria activate an immune response and are able to survive and colonize more abundantly, while continuing to cause tissue damage over many decades in many cases leading to gastric cancer which has an extremely low survival rate.

The H. Pylori bacteria influences the body’s T cells called regulatory T cells which down regulate the body’s defense and enable the development of a chronic infection.

Old natural cures have been found to be effective acting against the bacteria. One study demonstrated the positive impact of honey which has been reported to be effective in gastrointestinal disorders in humans, in the healing of wounds, burns and as antimicrobial agents and to have gastric protection against acute and chronic gastric lesions in animals. Furthermore, honey has the ability to inhibit the growth of Helicobacter pylori (H.pylori) in vitro and has also been used for stomach pains and problems for centuries.

Another study quite conclusively demonstrated that ingesting aloe vera was more effective on minimizing the impact and symptoms of stomach ulcers than the prescribed medications.

One thought on “Honey and Aloe Vera effective against stomach ulcers.”