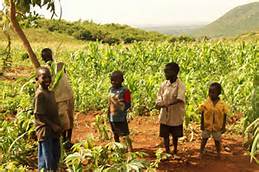 Kenya in the past has revolutionized the approach to genetically modified organisms(GMOS) by simply banning them in 2012. Now Kenya’s education, science and Technology Cabinet Secretary has revealed Kenya’s plans to lift the band and commercialize them by the end of the year. The push appears to be as a result of the influence of the input of U.S. trade specialist who advocate that there are no documented side effects of GMO consumption. Prevailing research suggests the opposite.

The Kenyan public has been particularly vocal in the backlash against GMOS approaching them with suspicion and distaste. Kaimenyi urged Kenya’s National Biosafety Authority, (NBA), to desensitize the Kenyan public to GMOS.

“I urge the Authority to create more public awareness on biosafety especially at this time when the country is preparing to commercialize GM products in Kenya. Many people in Kenya do not yet differentiate between a big tomato and a GMO,” the statement read on his behalf said.

The NBA Chief Executive Officer, Willy Tonui, has revealed how the executive influenced the Kenyan Government to lift the ban on GMOs citing that scientists have been unable to conclusively establish a link between them and cancer.

“Resistance to GMOs is too much and it’s based on lack of evidence. NBA has provided them (the Executive) with evidence about GM foods so I think in future there’ll be need to reconsider the ban by lifting it and we hope that it’ll happen very soon,” he said.