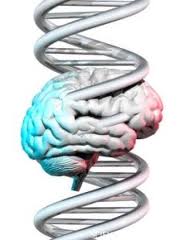 Research published in the journal of Molecular Psychiatry confirms how complex certain neurological disorders are. The researchers ultimately determined that schizophrenia, autism and intellectual disability have genes in common that are affected by epigenetics. Epigenetics is defined as a change in gene expression controlled by environmental factors.

Five genes in particular are common among all three disorders. They are called AUTS2, CDH8, MECP2, HUWE1 and TRAPPC9 and are strongly involved in the epigenetic regulation of transcription. In other words they are involved in reading, writing and editing of methylated DNA that help control when certain genes are switched on and off.

The research confirms that certain environmental factors may be a trigger to cause the expression of the symptoms of either autism, schizophrenia and intellectual disability and that theoretically the possibility of epigenetic intervention may be a factor in reversing said symptoms. Prior research has confirmed the impact of non coding RNA’s on autism; however, this study did not investigate the impact of these RNA strands on gene expression of the five common genes.

Shane McCarthy, Ph.D., lead author of the study pointed out the relevance of this finding: “there’s a growing awareness of the importance of epigenetic regulation during brain development, as well as in cognition in the mature brain,” McCarthy said.

“Research made possible by the CSHL-Trinity College collaboration is leading us toward a much better understanding of how complex sets of genes are involved in complex illnesses,” says Professors W. Richard McCombie of Cold Spring Harbor Laboratory, (CSHL), who is director of the Stanley Institute for Cognitive Genomics at CSHL. “Our work and that of other researchers, when taken together, is beginning to clarify our view of causation in these very complex, but also very common illnesses.”

Professor McCombie explained the complex nature of schizophrenia and that many genes can be contributing factor to complex disorders. The challenge for scientists, is that “the number of differences between even healthy individuals is so great that finding which specific variant might contribute to a specific disorder such as schizophrenia from among those that don’t cause problems, is difficult”, he said.

The research team has focused on a portion in the human genome called the exome, which contributes about 3%-4% of the total human genome sequence, containing protein-encoding genes. This strategy is especially useful in comparing children with their parents, because children have very few genetic variants that are not in one or the other parent. “Finding de novo variants in a child compared to their parents is technically relatively simple,” says McCombie, and presents scientists with a particularly strong “signal” of potentially significant genetic variation in children who have an illness like schizophrenia that is not evident in either parent.