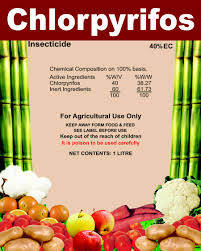 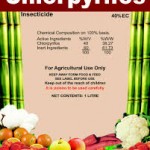 Chlorpyrifos is a neurotoxic insecticide that is banned from home use in the U.S. The Environmental Protection Agency (EPA) had determined that cumulative exposure results in serious adverse health outcomes, especially for children; however, the EPA left the insecticide on the market for agricultural uses. It is estimated that one to two million pounds of the pesticide have been applied each year in California since 2004.

Chlorpyrifos has a severe adverse environmental impact and is acutely toxic to bees, birds, mammals, aquatic life, and certain species of algae. Chlorpyrifos poisoning affects the central nervous system, the cardiovascular system, and the respiratory system, and causes skin and eye irritation. It has been shown to accumulate in fish and synergistically react with other chemicals.

The California Department of Pesticide Regulation (DPR) announced its intent to propose a more ‘restrictive use’ of all pesticide products containing the organophosphate insecticide chlorpyrifos. The regulations would specify that only trained and licensed professionals who have a permit from a local county agricultural commissioner (CAC) would be able to use these products.

“The proposed regulation is a very important step to further safeguard the people and environment of California,” said DPR director Brian Leahy. “Chlorpyrifos is one of the most widely used old organophosphate classes of pesticides. This key action is intended to reduce the widespread use of chlorpyrifos and help limit unintended exposures to the public.”

A 45-day comment period to allow public input on the proposed regulation in California is available until November 12, 2014. Comments may be submitted in person, in writing, or via email to dpr14002@cdpr.ca.gov. More information is available on the Department of Pesticide Regulation’s website http://www.cdpr.ca.gov/docs/legbills/rulepkgs/14-002/proposed_action.pdf