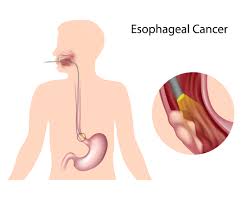 Oesophageal cancer, also referred to as cancer of the food pipe or gullet, is the 13th most common cancer in adults, with around 8,300 cases diagnosed each year in the UK. A new study published in the British Journal of Cancer has placed obese children at an increased risk of developing the disease.

The researchers studies the available data on 255,000 Danish school children, born between 1930 and 1971, whose height and weight was measured every year between the ages of 7 and 13. More than 250 of the children went on to develop oesophageal cancer over the age of 40. The scientists determined that by matching middle-aged patients with their school records, children aged 9-13 with a higher BMI, who were more likely to be overweight or obese, appeared to be at greater risk of developing this type of cancer in later life.

“Our results suggest that the increase in the number of overweight and obese children might lead to a significant rise in future cases of oesophageal cancer”, said Dr Jennifer Baker, associate professor at The Institute of Preventive Medicine in Denmark and the University of Copenhagen.

“It may be that being overweight as a child is directly linked to a higher risk of developing this cancer in later life. Or it might be that overweight children are more likely to become overweight adults, and we know that being above a healthy weight as an adult is a risk factor for many cancers, including oesophageal. More research is needed, but however the link works, our results underline how important it is for children to be a healthy weight – particularly as there is some evidence that overweight children could be at higher risk of other cancers later in life.”

The researchers used the results from the 1930s to the 1970s to calculate that 2.1 per cent of all oesophageal cases in adult men in Denmark could be attributed to boys being overweight or obese at the age of 13. It is estimated that the percentage could increase to 17.5 per cent due to the rise in childhood obesity levels.