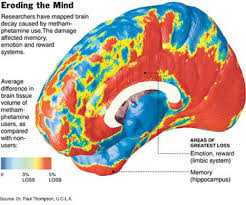 A new study by the University of Utah and Intermountain Healthcare has revealed that users of methamphetamine are at three times more risk for getting Parkinson’s disease. Approximately 4-6 million people worldwide have Parkinson’s Symptoms include tremor, shaking, slowed movement, rigid muscles, loss of automatic movements and speech changes. There is no cure for the disease.

Female meth users are five times more likely than women who do not use drugs to develop Parkinson’s. The study data consisted of 40,000 inpatient and outpatient clinic records in the Utah Population Database (UPDB), which contains genealogical, medical and government-provided information on Utah families.

“We feel comfortable that it’s just the meth causing the risk for Parkinson’s, and not other drugs or a combination of meth and other drugs,” says senior author Glen R. Hanson, PhD, professor and interim dean of the University of Utah School of Dentistry and professor of pharmacology and toxicology.

The researchers conclusively found that meth users have three times the risk for getting Parkinson’s disease as non-users and that female meth users may be nearly five times more likely than women who do not use drugs to develop Parkinson’s.

“Typically, fewer females use meth than males do,” Hanson said. “Even though women are less likely to use it, there appears to be a gender bias toward women in the association between meth use and Parkinson’s.”

“Normally, women develop Parkinson’s less often than men,” said co-author Karen Curtin, PhD, research assistant professor of medicine at the university and associate director of the UPDB. “However, women may not achieve the same improvement in symptoms from medications or surgery,” she said. “If meth addiction leads to sharply increased incidence of Parkinson’s disease in women, we should all be concerned.”