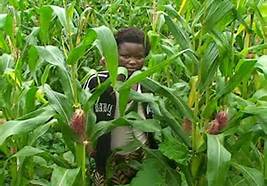 The African Centre for Biosafety (ACB) has released a new research compilation titled “GM Maize: Lessons For Africa-Cartels, Collusion And Control Of South Africa’s Staple Food”. The report can be accessed in its entirety here, http://www.acbio.org.za/index.php/publications/rest-of-africa/449-gm-maize-lessons-for-africa.

South African maize is a staple food to millions of South Africans and the report reveals how a select group of companies, including Tiger Brands, Pioneer and Premier Foods, have marginalized the poor by controlling the entire maize marketing chain. The end result is that the entire maize meal market is saturated with GM maize placing millions of South African consumers and their surrounding brothers and sisters at risk to the after effects of prolonged exposure to a toxic food substance where human health and safety has not been established by credible safety studies.

Instead the South African government, through the Public Investment Corporation (PIC) is the largest investor in Tiger Brands. Over 50% of the company’s shares are held outside South Africa.

Gareth Jones, a researcher at the ACB commented: “It appears as if South Africa’s major millers and retailers are making healthy profits from our staple food and certainly not passing falling maize prices onto consumers.’ The report shows that from April 2007 to April 2013, the average cost of a 5 kg bag of maize meal increased by 43.7% in rural areas, and 51.8% in urban areas. ‘These sharp price increases aggravate the already appalling conditions that millions of South Africans live under. This is particularly significant for the poor, who spend 41% of their income on an average “food basket”.

The report reveals the insidious marketing efforts of the Maize Cartel where Premier and Pioneer have all expanded their operations on the continent and Tiger Brands operates in 22 countries on the African continent.”Having already gorged their profit margins on the poorest of the poor in South Africa, these corporate giants are now glancing covetously to the vast African market north of the Limpopo. Experiences from South Africa should serve as stark warnings”, warned Mariam Mayet, director of the ACB.