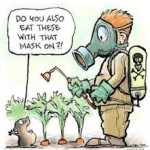 The Oregon city council has voted to ban the use of insecticides as the environment is being harmed by pesticides and their application is harmful to pollinators. The use of neonicotinoids have caused controversy and the Obama administration has implemented a task force to investigate the environmental impact of these substances which have been associated with a substantial amount of bee deaths around the country.

The Obama memorandum directed federal agencies to develop a pollinator health strategy within 180 days that supports and creates pollinator habitat, and works to reverse these unsustainable pollinator declines.

Oregon banned four of the bee-killing insecticides, including imidacloprid, clothianidin, thiamethoxam and dinotefuran, last months, from use on Linden trees. The ordinances banned the use of neonicotinoids on city property and urged private retailers to label any product that may contain these toxic chemicals. “We’re doing another good thing for the people of Portland, Oregon, the United States, maybe the entire world,” said Commissioner Amanda Fritz, who introduced the policy.

The Environmental Protection Agency (EPA) has announced a halt on the use of any new neonicotinoids, which pose a threat to bees or birds. Environmental activists and grass-root organization have criticized the decision as it did not address the use of current products already marketed and sold, and urged the EPA to reconsider these products.

There is a growing movement by local city councils, across the United States, to implement environmental protective measures that reverse the decline of the pollinators due to the harmful unregulated use of pesticides.