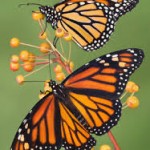 A new study published in the Science of Nature journal revealed that the USDA has conclusively identified that neonicotinoid insecticides are the most likely contributor to monarch butterfly declines in North America.

The Monarch butterfly population decline has caused wide spread alarm in environmental activist groups with a decline of over 90% in the last twenty years. This decline has commonly been linked to loss of milkweeds (Asclepias species) from farmer’s fields. Monarch caterpillars are dependent on milkweed and the application of roundup was previously associated with their decline. Neonicotinoids are now the most widely used pesticides in the world. Up to now there has been negligible research on the effects of neonicotinoids on butterflies.

The USDA study has shed a new light on what pesticides are a major contributing factor for the decline in the US as prior research has implicated neonicotinoids in pollinator declines worldwide. The experiments conducted by USDA researchers revealed that clothianidin can have effects on monarch caterpillars at doses as low as 1 part per billion. The effects seen in their experiments were on caterpillar size, caterpillar weight, and caterpillar survival. The researchers sampled milkweed from areas in South Dakota which revealed that milkweeds contained on average over 1ppb clothianidin.

“These results are very worrisome, but it is also crucial not to get lost in the specifics of chemical toxicology and individual species declines” says Allison Wilson, Science Director of the Bioscience Resource Project, a non-profit public interest science organization. “Industrial agriculture is a lethal combination of methods that is causing the extinction of thousands of species worldwide. It is affecting birds, amphibians, bats and other pollinators besides butterflies. Many ecosystems are staring down the barrel.”

“”The saddest irony is that, though industrial agriculture experts call their methods ‘scientific’, using toxins to kill pests runs contrary to all biological understanding, including the sciences of ecology, of evolution, and of complex systems. The proof of this is that the very best results in all of agriculture come from farming methods that reject all industrial inputs. Agribusiness would very much like that not to be known.”

“The best news is that there is a simple way to transfer to sustainable agricultural methods: remove the subsidies for industrial farming.”